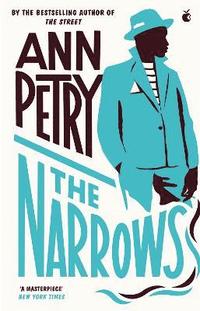 av Ann Petry
Häftad Engelska, 2021-11-18
127
Köp
Spara som favorit
Finns även som
Visa alla 2 format & utgåvor
BY THE BESTSELLING AUTHOR OF THE STREET With a new introduction by Kaitlyn Greenidge, author of Libertie 'Petry is the writer we have been waiting for, hers are the stories we need to fully illuminate the questions of our moment . . . insightful, prescient and unputdownable . . . The Narrows is the story of an interracial romance that proves that passion and prejudice are not mutually exclusive' Tayari Jones It's Saturday, past midnight, and thick fog rolls in from the river like smoke. Link Williams is standing on the dock when he hears quick footsteps approaching, and the gasp of a woman too terrified to scream. After chasing off her pursuer, he takes the woman to a nearby bar to calm her nerves, and as they enter, it's as if the oxygen has left the room: they, and the other patrons, see in the dim light that he's Black and she's white. Link is a brilliant Dartmouth graduate, former athlete and soldier who, because of the lack of opportunities available to him, tends bar; Camilo is a wealthy, married heiress who has crossed the town's racial divide to relieve the tedium of her privileged life. Brought together by chance, Link and Camilo draw each other into furtive encounters that violate the rigid and uncompromising social codes of their times. 'Petry will always feel on time. Her kind of talent will always feel startling and sui generis. . . . Her work endures not only because it illuminates reality, but because it harnesses the power of fiction to supplant it' Parul Seghal, New York Times 'The Street and The Narrows are masterpieces of social realism . . . . [Petry's] writing transcends comparisons. It's volatile but exacting, heartbreaking but often brutally funny. Labels don't stick to it' Wall Street Journal
Visa hela texten

Her work endures not merely because of the strength of its message but its artistry . . . Petry will always feel on time. Her kind of talent will always feel startling and sui generis: The music of her sentences, and their discipline; her unerring sense of psychology; the fullness with which she endows each character, which must be understood as a kind of love; the plots that commandeer whole hours and days . . . Her work endures not only because it illuminates reality, but because it harnesses the power of fiction to supplant it * New York Times * Petry is the writer we have been waiting for, hers are the stories we need to fully illuminate the questions of our moment, while also offering a page-turning good time. Ann Petry, the woman, had it all, and so does her insightful, prescient and unputdownable prose . . . The Narrows is the story of a doomed interracial romance that proves that passion and prejudice are not mutually exclusive Ann Petry's novels The Street and The Narrows are masterpieces of social realism - volatile but exacting, heartbreaking but often brutally funny ... The Narrows is capacious, elliptical and immersive. Slowly and comprehensively, it envelops you ...The scenes seethe with rage, and yet the book's sheer profusion makes it feel joyous and celebratory * Wall Street Journal *

Ann Petry (1908-1997), novelist, short story writer and writer of books for young people, was one of America's most distinguished authors. Petry began by studying pharmacology, and in 1934 received her Doctor of Pharmacy degree from the University of Connecticut College of Pharmacy. She worked as a registered pharmacist in Old Saybrook and in Lyme, and during these years wrote several short stories. When she married George David Petry in 1938, the course of her life changed. They lived in New York City, and Ann went to work for the Harlem Amsterdam News. By 1941, she was covering general news stories and editing the women's pages of the People's Voice in Harlem. Her first published story appeared in 1943 in the Crisis, a magazine published monthly by the NAACP. Subsequent to that, she began work on her first novel, The Street, which was published in 1946 and for which she received the Houghton Mifflin Literary Fellowship. Petry wrote two more novels, The Country Place and The Narrows, and numerous short stories, articles and children's books.