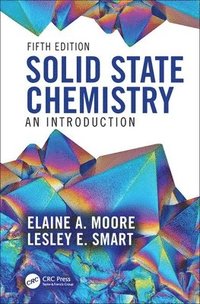 "The latest edition of Solid State Chemistry combines clear explanations with a broad range of topics to provide students with a firm grounding in the major theoretical and practical aspects of the chemistry of solids." -Professor Robert Palgrave, University College London, UK "A comprehensive guide to solid state chemistry which is ideal for all undergraduate levels. It cover the fundamentals of the area from basic structures, to methods of analysis well but also introduces modern topics such as sustainability." -Dr Jennifer Readman, University of Central Lancashire, UK

Elaine A. Moore studied chemistry as an undergraduate at Oxford University and then stayed on to complete a DPhil in theoretical chemistry with Peter Atkins. After a two- year postdoctoral position at the University of Southampton, she joined the Open University in 1975, becoming a lecturer in chemistry in 1977, senior lecturer in 1998 and reader in 2004.She retired in 2017 and currently has an honorary position at the Open University. She has produced OU teaching texts in chemistry for courses at levels 1, 2 and 3 and written texts in astronomy at level 2 and physics at level 3. She is coauthor of Metals and Life and of Concepts in Transition Metal Chemistry, which were part of a level 3 Open University course in inorganic chemistry and co-published with the Royal Society of Chemistry. She was team leader for the production and presentation of an Open University level 2 chemistry module delivered entirely online. She is a Fellow of the Royal Society of Chemistry and a Senior Fellow of the Higher Education Academy. She was co-chair for the successful Departmental submission of an Athena Swan bronze award. Her research interests are in theoretical chemistry applied mainly to solid-state systems and is author or coauthor of over 50 papers in refereed scientific journals. A long-standing collaboration in this area led to her being invited to help run a series of postgraduate workshops on computational Materials Science hosted by the University of Khartoum. Lesley E. Smart studied chemistry at Southampton University, United Kingdom, and after completing a PhD in Raman spectroscopy, she moved to a lectureship at the (then) Royal University of Malta. After returning to the United Kingdom, she took an SRC Fellowship to Bristol University to work on X-ray crystallography. From 1977 to 2009, she worked at the Open University chemistry department as a lecturer, senior lecturer and Molecular Science Programme director, and held an honorary senior lectureship there until her death in 2016. At the Open University, she was involved in the production of undergraduate courses in inorganic and physical chemistry and health sciences. She was the coordinating editor and an author of The Molecular World course, a series of eight books and DVDs co-published with the Royal Society of Chemistry, authoring two of these (2002), The Third Dimension and Separation, Purification and Identification. Her most recent books are (2007) Alcohol and Human Health and (2010) Concepts in Transition Metal Chemistry. She has an entry in Mothers in Science: 64 Ways to Have It All (downloadable from the Royal Society website). She served on the Council of the Royal Society of Chemistry and as the chair of their Benevolent Fund. Her research interests were in the characterisation of the solid state, and she authored publications on single-crystal Raman studies, X-ray crystallography, Zintl phases, pigments and heterogeneous catalysis and fuel cells.