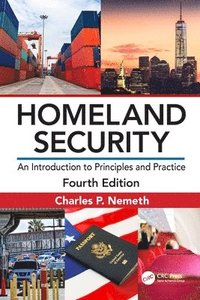 An Introduction to Principles and Practice

Dr. Charles P. Nemeth has spent the vast majority of his professional life in the study and practice of law and justice. He is a recognized expert on professional ethics and the justice system, private-sector justice and private security systems. Presently, Dr. Nemeth is Chair and Professor of Security, Fire and Emergency Management and Director of the Center of Private Security and Safety at John Jay College in New York City. He is a prolific writer, having published numerous texts and articles on law and justice throughout his impressive career. His text, Private Security and the Law 4th- (Elsevier, 2012) is considered the foremost treatise on the subject matter. A 5th edition has been published by Taylor/Francis, 2018. His private security expertise is further buttressed by: Private Security and Investigative Process 4th edition (CRC Press, 2019); Private Security: Principles and Practice (CRC Press, 2019l Criminal Law 2nd (CRC Press, 2012) and Law and Evidence 2nd (Jones and Bartlett, 2010). In the area of Homeland Security, he has published Introduction to Homeland Security: Practices and Principles 3rd edition (CRC Press, 2010, 2014, 2017). A 4th edition is planned for 2020. Dr. Nemeht has also authored a series of philosophical works on Thomas Aquinas including: Aquinas on Crime (St. Augustine's Press, 2010); Aquinas in the Courtroom (Praeger/Greenwood Press, 2001); Aquinas and King: A Discourse on Civil Disobedience (Carolina Academic Press, 2011) and Cicero and Aquinas: A Comparative Study of Nature and the Natural Law (Bloomsbury Publishing, 2018). He has also served as Chief Editor to a peer reviewed journal- The Homeland Security Review since 2005 and currently serves as Chief Editor for the Law, Ethics and Jurisprudence series to be published by Anthem Press. Dr. Nemeth has been an educator for more than 40 years. He holds memberships in the New York, North Carolina and Pennsylvania Bars. Dr. Nemeth was previously a Chair at the State University of New York at Brockport and California University of PA- one of Pennsylvania's 14 State Universities. Dr. Nemeth is a much-sought-after legal consultant for security companies and a recognized scholar on issues involving law, professional ethics and morality and the impact of privatization on public justice models. Dr. Nemeth resides in Pittsburgh, Pennsylvania with his spouse, Jean Marie, together for 48 years and blessed with seven children all of whom are accomplished personally and professionally.