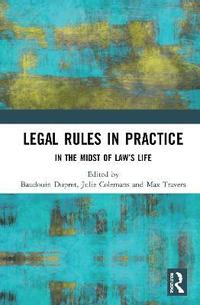 In the Midst of Law's Life

av Baudouin Dupret, Julie Colemans, Max Travers
Inbunden Engelska, 2020-12-31
1589
Köp
Spara som favorit
Finns även som
Visa alla 2 format & utgåvor
Understanding legal rules not as determinants of behavior but as points of reference for conduct, this volume considers the ways in which rules are invoked, referred to, interpreted, put forward or blurred. It also asks how both legal practitioners and lay participants conceive of and participate in the construction of facts and rules, and thus, through decisions, defenses, pleas, files, evidence, interviews and documents, actively participate in law's life. With attention to the formulation of notions such as person, evidence, intention, cause and responsibility in the course of legal practices, Legal Rules in Practice provides the outlines of a praxiological anthropology of law - an anthropology that focuses on words, concepts and reasoning as actively used to solve conflicts with the help of legal rules. As such, it will appeal to sociologists, anthropologists and scholars of law with interests in ethnomethodology, rule-based conduct and practical reasoning.
Visa hela texten

Baudouin Dupret is Directeur de Recherche at the French National Centre for Scientific Research (CNRS) and guest lecturer at the University of Louvain, Belgium. He has published extensively in the field of the sociology and anthropology of law, legislation and media, especially in the Middle East. He is the co-editor of Law At Work: Studies in Legal Ethnomethods and the author of Practices of Truth: An Ethnomethodological Inquiry into Arab Settings, Adjudication in Action: An Ethnomethodology of Law and Positive Law from the Muslim World. Julie Colemans is a research engineer at the Faculty of Law, Political Science and Criminology of the University of Liege, Belgium. Her PhD thesis dealt with the decision-making process within the Belgian Council of State. She continued to work on legal reasoning through an ethnography of emotions within law courts, and her current research surrounds the epistemological framework underlying legal doctrine. Max Travers is Senior Lecturer in the School of Social Sciences at the University of Tasmania, Australia. He is the author of The Reality of Law, The British Immigration Courts and The Sentencing of Children; and co-author of Rethinking Bail. The latter study about bail describes decision-making, and responses to "vulnerable" defendants, in criminal courts.

Introduction: legal rules in practice: an exploration into law's life B. Dupret, J. Colemans, and M. Travers 1. Ruleness F. Schauer Part 1: Ruleness and its relativity 2. No rule for the application of rules M. Constable and L.R. Meyer 3. The structure of the legal system and the emergence of the state M. Troper 4. Equality, hierarchy, and the place of rules P. Dresch 5. Laws and proverbs: the making and unmaking of moral rules in historic Tibet F. Pirie Part 2: Materiality, artefactuality and idiosyncrasy of legal practices 6. Reading case files: the material organization of cases and the work of judges J.-M. Weller 7. Verbatim records and the testing ceremony: on the production of decidability in German asylum hearings T. Scheffer 8. Craft skills and legal rules: how Australian magistrates make bail decisions M. Travers 9. Vernacular visions of viral videos: speaking for evidence that speaks for itself M. Lynch Part 3: Meaning and emotions in legal interpretation 10. Time to agree? Rules, agreements and consent judgements in a Belgian family court B. Truffin 11. Law, emotions and categorizations: lightning a judicial blind spot: on the role of emotions inside the magistrate's decision making J. Colemans 12. Playing by the rules: the search for legal grounds in homosexuality cases -Indonesia, Lebanon, Egypt, Senegal B. Dupret et al.