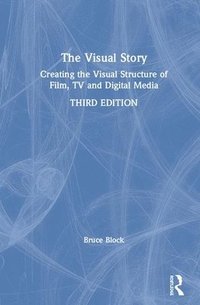 Creating the Visual Structure of Film, TV, and Digital Media

av Bruce Block
Inbunden Engelska, 2020-08-05
1562
Köp
Spara som favorit
Finns även som
Visa alla 4 format & utgåvor
This updated edition of a best-selling classic shows you how to structure your visuals as carefully as a writer structures a story or composers structure their music. The Visual Story teaches you how to design and control the structure of your production using the basic visual components of space, line, shape, tone, color, movement, and rhythm. You can use these components to effectively convey moods and emotions, create a visual style, and utilize the important relationship between the visual and the story structures. Using over 700 color illustrations, author Bruce Block explains how understanding the connection between story and visual structures will guide you in the selection of camera angles, lenses, actor staging, composition, set design and locations, lighting, storyboard planning, camera coverage, and editing. The Visual Story is an ideal blend of theory and practice. The concepts and examples in this new edition will benefit students learning cinematic production, as well as professional writers, directors, cinematographers, art directors, animators, game designers, and anyone working in visual media who wants a better understanding of visual structure.
Visa hela texten

'Bruce Block masterfully deconstructs visual storytelling. Exposure to his material is essential for all students of cinema. This book will make you a better filmmaker.' American Film Institute 'Bruce's class taught me a key lesson on how to approach filmmaking as a language. Once I understood visual storytelling through that lens, it fundamentally shifted the way I experienced and created films. It not only illuminated the elemental process of adapting words to images, but also guided me to a deeper awareness of how to construct a story.' Sam Esmail, creator, producer, writer and director of Mr. Robot and Homecoming 'Bruce Block has a unique knowledge and understanding of the visual structure of film. The Visual Story is the only book of its kind. It will literally teach you to become a better storyteller through the use of visuals.' Nancy Meyers, producer, writer, director of Something's Gotta Give, The Holiday, It's Complicated, The Intern 'Bruce Block is a legend and a dynamic human being who understands the visual story medium like no other. After taking his class during my time at USC's School of Cinematic Arts Director's program, I gained invaluable knowledge on how to clearly articulate my vision for my films, in my scripts and on set. Bruce's techniques are 100% applicable to every scenario I've been in during physical production. From the climactic barn sequence in Burning Sands (which we had to shoot in less than four hours) to the scary visuals in The First Purge, I was able to draw on the techniques I learned from Bruce to create a unique vision for both films. By working in concert with my DP and my crew, I was able to get the shots I needed efficiently and effectively. I'm thankful to Bruce for helping me grow as a filmmaker and I recommend this book to any storyteller who wants to take their visual storytelling to the next level.' Gerard McMurray, director The First Purge; producer, writer, director Burning Sands 'I spend much of my time in pre-production quoting Bruce Block to my cinematographers, production designers, costume designers and editors. In all my years in the business I've never found a clearer, more useful articulation of film grammar.' Jay Roach, producer, director of Bombshell, Trumbo, Meet the Fockers, Meet the Parents, The Austin Powers films 'Bruce Block's in-depth understanding of visual structure is inspirational to those working in animation. This reference source is invaluable and essential for any artist.' Walt Disney Television Animation 'Bruce Block's work gives the visual storyteller a framework for making story-driven decisions, not just visual choices. It gives the filmmaker tools to create harmony and counterpoint between the story structure and its visual realization on the screen.' Randy Nelson, founding Dean of Pixar University at Pixar Animation Studios 'You hold in your hand a key to understanding the complex and ever changing world of modern cinema.' Charles Shyer, writer, director Alfie, Father of the Bride I and II, Baby Boom 'No matter what kind of visual storyteller you are, whether a filmmaker, photographer, or graphic designer, Bruce Block explains how visual narrative works in a way that is clear and accessible. ' David Pagani, Creative Director-On Air, DIRECTV 'Bruce Block is legendary in the field of broadcast design. His profound insight into the art of visual storytelling will forever change the way you work.' Dan Pappalardo, Executive Creative Director/Partner, Troika Design Group 'I think every cinematographer-in-training should read this book. It will teach them how important collaboration with others in the crew is by having an overall concept of all that goes into the creation of the Visual Story.' Rexford Metz, ASC 'His book is a sort of Elements of Style for filmmakers, and any screenwriter, director or cinematographer with a point of view will find a great deal of creative inspiration in The Visual Story's guide to the fundamentals of the craft

Bruce Block has worked in a creative capacity on dozens of feature films, television shows, commercials, and animated productions. His feature film producing credits include Something's Gotta Give, What Women Want, America's Sweethearts, The Parent Trap, and Father of the Bride I and II. He served as a creative consultant on Spanglish, As Good As It Gets, Stuart Little, and many other film and television productions. He is a tenured professor at the University of Southern California's School of Cinematic Arts and holds the Sergei Eisenstein Endowed Chair in Cinematic Design. Mr. Block gives seminars at a variety of studios including Blue Sky Studios, Cartoon Network, Disney Feature and Television Animation, Dreamworks Animation, Industrial Light & Magic, Laika, LucasFilm, Nickelodeon Animation Studios, Pixar Animation Studios, and a wide range of European and American film schools including AFI and Cal Arts. Mr. Block also conducts seminars for digital game designers and companies including Activision-Blizzard, Blur Studio, Google, Hulu, and Tencent. He is a member of the Director's Guild of America, the Art Director's Guild, and co-author of the book 3D Storytelling (Focal Press). www.bruceblock.com