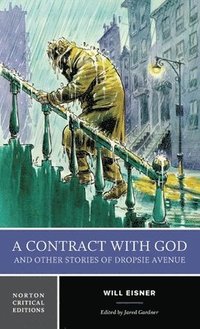 A Contract with God and Other Stories of Dropsie Avenue

Born in New York City, Will Eisner (1917-2005) was the author of the legendary comic strip The Spirit, as well as fifteen graphic novels and three influential instructional textbooks. The comic industry's top awards, the Eisner Awards, are named in his honor. Jared Gardner is Joseph V. Denney Designated Professor of English at The Ohio State University. He is the author of three monographs, including Projections: Comics and the History of 21st-Century Storytelling and The Rise and Fall of Early American Magazine Culture, and he is the editor or coeditor of several volumes, including The Comics of Charles Schulz: The Good Grief of Modern Life. He has worked closely for many years with the Billy Ireland Cartoon Library and Museum at Ohio State, including serving as curator on several exhibits.