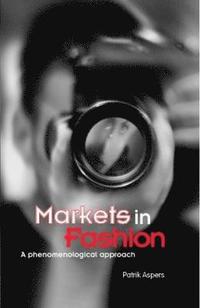 av Patrik Aspers
Inbunden Engelska, 2005-11-01
1934
Köp
Spara som favorit
Kan levereras innan julafton!
Finns även som
Visa alla 4 format & utgåvor
Interest in contemporary cultural industries has grown in the past decade, as they take on a greater significance in our increasingly consumer-led society. Focusing on the world of fashion photography, this book presents an interdisciplinary approach in which this and other aesthetic markets, such as advertising, modelling, art, music and more, can be viewed. The main thrust of this groundbreaking book, is in developing a theory for these cultural markets, characterized by insecurity, and where status and aesthetic diversity generate order and price differentiation. In these industries, services and products are offered that are a mix of the aesthetic and the economic, and for fashion photographers such as those studied here, it is necessary to carefully position themselves in the market by developing unique photographic styles and separating themselves from competitors. Yet the markets in which these industries operate differ from the type of exchange markets depicted by neoclassical economists, and therefore cannot be considered using such modes of analysis. Instead Aspers conducts his study using empirical phenomenology, an original approach presented here for the first time, which can be easily used in other empirical studies. He draws on original empirical material; participant observation and interviews generated in New York and Stockholm; which bring a depth of analysis and a relevance to this book which academics, researchers and those with a vested interest in such industries will value. Written by one of the world's brightest young economic sociologists, this fascinating book (previously published in Sweden and enthusiastically received) is endorsed by recognized industry authorities. A noteworthy book, it provides a foothold in the burgeoning sub discipline of economic sociology, and a significant analysis of the economics of the fashion photography industry.
Visa hela texten