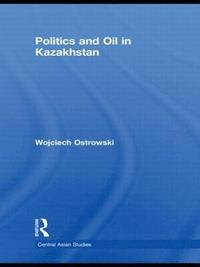 Politics and Oil in Kazakhstan

av Wojciech Ostrowski
Inbunden Engelska, 2009-10-16
2225
Köp
Spara som favorit
Finns även som
Visa alla 4 format & utgåvor
In Kazakhstan, the oil industry plays a crucial role in its economic and political life due to the country's considerable oil revenues and accompanying conflicting interests. As an arena of political struggle, this industry provides a good test case for uncovering regime maintenance techniques. This book examines the ways in which the post-Soviet Kazakh regime has managed to sustain itself in power, and the regime maintenance techniques it has used in the process of establishing and upholding its position. It scrutinizes the tools that the Kazakh regime employed in order to bring the country's oil industry under its control and, while doing so, shifts the emphasis from the prevalent zhuz-horde, tribe, and clan-based approaches to Kazakh politics towards corporatism and patron-client mechanisms of control. Based on extensive field work in Kazakhstan and in-depth interviews with high ranking representatives of companies working in Kazakhstan's oil and gas industry, both local and foreign, the National Oil Company and its subsidiaries, government agencies, foreign diplomats, journalists and representatives of oppositional parties and NGOs, this book provides a comprehensive study of the issues of politics of oil and state-business relationships in Kazakhstan.
Visa hela texten

"Ostrowski's command of the topic is impressive. His study includes many interesting facts that will be valuable for researchers. He conducted in-depth interviews with high-ranking representatives of numerous bodies...Ostrowski's study provides a good example of how informal political relations and behaviour are an important mechanism in maintaining the Kazakh regime. It is a good empirical contribution to the existing literature on resource-rich post-Soviet countries and their political economy." - Julia Kusznir, Europe-Asia Studies, 62:8, 2010 "[The study] markedly improves our understanding of the political economy of a petrol-rich state... [it] will become a touchstone for anyone working in this area... [and] represents an important contribution to our understanding of Kazakhstan in the 1990s and 2000s." - Edward Schatz, University of Toronto; Central Asian Survey, Vol. 30, No. 1, March 2011

Dr Wojciech Ostrowski holds a PhD in International Relations from the University of St Andrews, UK. His areas of specialization include the politics of oil, authoritarian regimes and state-business relationships in Central Asia.