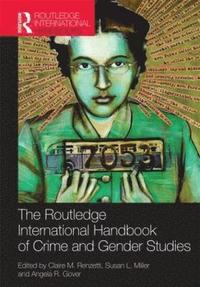 av Claire Renzetti, Susan Miller, Angela Gover
Inbunden Engelska, 2012-10-29
2705
Köp
Spara som favorit
Criminological research has historically been based on the study of men, boys and crime. As a result, the criminal justice system's development of policies, programs, and treatment regimes was based on the male offender. It was not until the 1970s that some criminologists began to draw attention to the neglect of gender in the study of crime, but today, the study of gender and crime is burgeoning within criminology and includes a vast literature. The Routledge International Handbook of Crime and Gender Studies is a collection of original, cutting-edge, multidisciplinary essays which provide a thorough overview of the history and development of research on gender and crime, covering topics based around: theoretical and methodological approaches gender and victimization gender and offending gendered work in the criminal justice system future directions in gender and crime research. Alongside these essays are boxes which highlight particularly innovative ideas or controversial topics - such as cybercrime, restorative justice, campus crime, and media depictions. A second set of boxes features leading gender and crime researchers who reflect on what sparked their interest in the subject. This engaging and thoughtful collection will be invaluable for students and scholars of criminology, sociology, psychology, public health, social work, cultural studies, media studies, economics and political science.
Visa hela texten

Claire M. Renzetti is the Judi Conway Patton Endowed Chair in the Center for Research on Violence Against Women, and Professor of Sociology, at the University of Kentucky. She is editor of the journal, Violence Against Women; co-editor of the Interpersonal Violence book series for Oxford University Press; and editor of the Gender, Crime and Law book series for Northeastern University Press. Her recent research focuses on religiosity and intimate partner violence, and the provision of services for domestic sex trafficking victims. Susan L. Miller is Professor Sociology and Criminal Justice at the University of Delaware. Her research interests are in gender and crime, violence against women, and restorative justice. Her most recent book, After the Crime: The Power of Restorative Justice Dialogues between Victims and Violent Offenders (New York University Press, 2011) received the Best Book Award from the Academy of Criminal Justice Sciences in 2012. Angela R. Gover is a Professor in the School of Public Affairs at the University of Colorado Denver. Her research interests include gender and crime, victimization, and intimate partner violence. Gover's recent work has appeared in Violence Against Women, Violence and Victims, and the Journal of Interpersonal Violence.