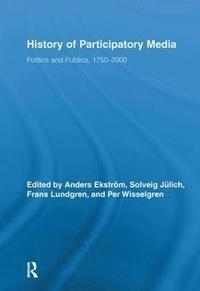 av Anders Ekstroem, Solveig Julich, Frans Lundgren, Per Wisselgren
Inbunden Engelska, 2010-11-02
2568
Köp
Spara som favorit
Finns även som
Visa alla 1 format & utgåvor
This book argues for a historical perspective on issues relating to the notion of participatory media. Working from a broad concept of media - including essays on the 19th century press, early sound media, photography, exhibitions, television and the internet - the book offers a broad empirical approach to different modes of audience participation from the mid 19th century to the present. Using the insights from the historical case studies, the book also explores some of the key concepts in discussions on the politics of participation, arguing for a theoretical perspective sensitive to the asymmetries that characterize the distribution of agency in the relationship between media and users. Scholarly discussions on participatory media now occur in several fields. This book argues that all of these discussions are all too often obscured by a rhetoric of newness, assuming that participatory media is something unique in history, radical and revolutionary. By challenging the historiography implicit in this rhetoric, the book also engages in a discussion of issues of more general relevance to the multidisciplinary field of media history.
Visa hela texten