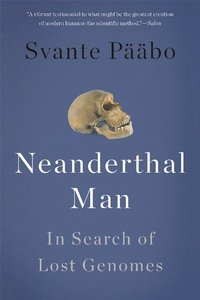 In Search of Lost Genomes

av Svante Paabo
Häftad Engelska, 2015-03-24
171
Bevaka
Spara som favorit
Tillfälligt slut – klicka "Bevaka" för att få ett mejl så fort boken går att köpa igen.
ONE OF AMAZON'S TOP 100 BOOKS OF 2014 Neanderthal Man tells the story of geneticist Svante Paabo's mission to answer this question: what can we learn from the genomes of our closest evolutionary relatives? Beginning with the study of DNA in Egyptian mummies in the early 1980s and culminating in the sequencing of the Neanderthal genome in 2010, Neanderthal Man describes the events, intrigues, failures, and triumphs of these scientifically rich years through the lens of the pioneer and inventor of the field of ancient DNA. We learn that Neanderthal genes offer a unique window into the lives of our hominid relatives and may hold the key to unlocking the mystery of why humans survived while Neanderthals went extinct. Paabo's findings have not only redrawn our family tree, but recast the fundamentals of human history,the biological beginnings of fully modern Homo sapiens , the direct ancestors of all people alive today.
Visa hela texten

"Neanderthal Man opens with this episode [when Paabo and his team first sequenced Neanderthal DNA], and it's a nice touch by Paabo, bringing us straight to the moment when his long, painstaking effort to tease ancient DNA out of hominin fossils yielded its first dramatic results." --David Quammen, Harper's "Paabo has provided us with a fabulous account of three decade of research into ancient DNA, culminating in 2010 with the publication of the Neanderthal genome... Paabo's book has to be compared to The Double Helix (1968), James Watson's brilliant but controversial account of how the structure of DNA was discovered. When taken together they provide an insight into how bio-molecular science has both changed and remained much the same during the last half-century. Both are strong personal accounts of scientific discovery, exposing how science is driven as much by passion, ambition, and competition as by rational thought and the sharing of knowledge. In both books the reader is gripped by life stories of far greater interest than those in may novels before being plunged into passages of near-unintelligible science (despite much simplification) that are nevertheless strangely enthralling." --Steven Mithen, New York Review of Books "I came for the cavemen, but I stayed for the geeky nail-biter of a story about doing historic science in a climate of fierce international competition and rapid technological innovation... Truth be told, DNA sequencing is pretty wonky stuff, but perhaps it's Paabo's own passionate investment in the undertaking that makes his story so exciting to read about; Neanderthal Man does for paleogenetics something like what Steven Spielberg did for the legislative process in Lincoln... [T]his book is a vibrant testimonial to what might be the greatest creation of modern humans: the scientific method." --Laura Miller, Salon "Much of Paabo's book is devoted to the details of the difficulties [of extracting DNA from ancient bones], and how they were overcome by an awesome combination of technology, ingenuity and persistence. It's a story of how modern high-concept science is done, shot through with the crackle of problem-solving and the hum of project tension, with occasional riffs of annoyance about major scientific journals and people who want dinosaur DNA." --The Independent (UK) "If Paabo weren't such a good storyteller, the book might have bogged down with descriptions of things like the different techniques of polymerase chain reaction, and all it takes to build a clean lab. But he's a clever enough writer to keep the reader's attention with a fast-paced story and wonderful details." --23andMe blog "This is a fascinating story of how modern science and especially computer technology is opening vistas onto our prehistoric history." --The Explorers Journal "Paabo provides a fascinating look at how his personal life intersected with the founding of a scientific field that has revolutionized evolution." --Science News "In Neanderthal Man, Svante Paabo offers readers a front-row seat to the still-unfolding understanding of this enigmatic human ancestor by recounting his own years of work... Paabo quite candidly relays the doubts and challenges that accompanied more than a decade of discovery--a labor that elevated Neanderthals from troglodyte brutes inhabiting a dead-end branch of the human family tree to a complex species that interbred with other hominins, including Homo sapiens. Never one to shy away from provocative statements or even-more-provocative research, Paabo gives what appears to be an honest and open account of his pioneering studies of Neanderthal genetics." --The Scientist "Evolutionary biologists are, general, pretty interesting people to talk to, but rarely would you describe their lives as thrilling. The notion of combining an autobiography with a popular science book may therefore not seem especially compelli

Svante Paabo is the founder of the field of ancient DNA. The director of the department of genetics at the Max Planck Institute for Evolutionary Anthropology in Leipzig, Paabo has been featured in the New York Times, Newsweek, National Geographic, and The Economist, as well as on NPR, PBS, and BBC. In 2009 Time named him one of the 100 Most Influential People in the World. Paabo lives in Leipzig, Germany.