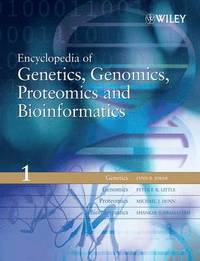 av Michael J Dunn, Lynn B Jorde, Peter F R Little, Shankar Subramaniam
Inbunden Engelska, 2005-09-01
28540
Köp
Spara som favorit
Available in print and online, this unique reference brings together all four fields of genetics, genomics, proteomics, and bioinformatics to meet your dynamic research requirements. It brings together the latest concepts in these vibrant areas and ensures a truly multidisciplinary approach. Topics include genetic variation and evolution, epigenetics, the human genome, expression profiling, proteome families, structural proteomics, gene finding/gene structure, protein function and annotation, and more. The work incorporates a vast amount of topical information, profiles cutting-edge techniques, and presents the very latest findings from an international team of over five hundred contributors. With articles for both students and more experienced scientists, this is a key reference source for everyone.* Contains more than 450 articles covering all aspects of genomics, proteomics, bioinformatics and related technologies* Includes a glossary containing over 550 clear and concise definitions "I am pleased to recommend it heartily as a essential reference tool...should remain the definitive work...for many years to come." THE CHEMICAL EDUCATOR "Jorde...and co-editors have done a remarkable job in coordinating this information, distilling it into a package that is both easy to navigate and over-flowing in discovery. " ELECTRIC REVIEW
Visa hela texten

"I am pleased to recommend it heartily as a essential reference tool...should remain the definitive work...for many years to come." (The Chemical Educator, November/December 2006) "...Jorde...and co-editors have done a remarkable job in coordinating this information, distilling it into a package that is both easy to navigate and over-flowing in discovery." (Electric Review, September/October 2006)

Volume Editors: Dr. Lynn Jorde is a Professor in the Department of Human Genetics at the University of Utah School of Medicine, USA. Dr. Jorde's laboratory is actively involved in studies of human genetic variation and in studies of the genetic basis of human limb malformations. He has published more than 150 scientific articles and is the lead author of Medical Genetics, a textbook that is used widely in North America and elsewhere. Dr. Jorde has served on several advisory panels for the National Science Foundation and the National Institutes of Health. He recently completed a 4-year term as a member of the Mammalian Genetics review panel at the National Institutes of Health. He is on the Board of Directors of the American Society of Human Genetics and has served on the editorial boards of Human Biology, the American Journal of Human Biology, and the American Journal of Human Genetics. Peter Little is the Professor of Medical Biochemistry and Head of the School of Biotechnology and Biomolecular Sciences at the University of New South Wales, Sydney, Australia. Peter Little obtained his PhD in 1976 from Edinburgh University, studying with Edwin Southern and Peter Walker. He carried out postdoctoral research between 1976 and 1980 at St. Mary's Hospital Medical School, from 1980 to 1981 at the California Institute of Technology and from 1981 to 1982 at Harvard University. From 1982-1987 he was a staff scientist at the Institute of Cancer Research, London and from 1987 to 2000 a Lecturer, then Reader, at the Imperial College of Science Technology and Medicine. He accepted his current position and moved to Australia in 2000. Peter Little's research has been at the interface of molecular genetics, genetics and computational biology and he has published over 100 papers in these areas. He is a widely read commentator on molecular genetics and genomics and has a present research interest in the effects of genetic variation upon transcription. He has a long experience in the administration of science, working with national and international agencies and corporations and is on the editorial board of a number of Genomics and Biochemistry journals. Dr. Michael J. Dunn is?SFI Research Professor of Biomedical Proteomics at University College Dublin, Ireland.Dr Mike Dunn has recently been appointed Professor of Proteomics at the Institute of Psychiatry, King's College, London, UK. His research team have moved to the new state-of-the-art proteomics facility that has been established as a joint facility between the Institute of Psychiatry and Proteome Sciences Plc. Before this move, Dr Dunn was a senior staff member in the National Heart and Lung Institute Division of Imperial College of Science, Technology and Medicine, London, UK for 13 years (1988-2001). His proteomics research group was based in the Heart Science Centre at Harefield Hospital, London, where research focused on laboratory and clinical studies of heart disease and transplantation. Dr Dunn's group has considerable experience in applying the proteomics approach to characterise alterations in protein expression associated with myocardial dysfunction in heart disease and to investigate processes of acute and chronic rejection following cardiac transplantation. Since the move to the Institute of Psychiatry, Dr Dunn's research focus includes neuroscience, with emphasis on the application of proteomics to the study of neurodegenerative disease. Dr Dunn has used gel electrophoretic techniques for many years, beginning with his post-doctoral studies of erythrocyte membrane proteins at the University of Edinburgh (1970-1976), and then applied to the study of alterations in protein expression in muscular dystrophy (1978-1988) and heart disease (since 1988). Much of his research has involved the use of two-dimensional gel electrophoresis combined with quantitative computer analysis of protein expression profiles, followed by protein identification and characterisation using a range o