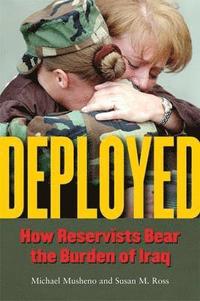 How Reservists Bear the Burden of Iraq

av Michael Craig Musheno, Susan M Ross
Häftad Engelska, 2009-01-01
387
Köp
Spara som favorit
Kan tyvärr inte levereras innan julafton.
Deployed is an important and deeply moving book. Here, in this story, the heroic tradition of the American citizen-soldier lives on. ---Andrew J. Bacevich, Professor, Boston University, and author of The New American Militarism: How Americans Are Seduced by War Whatever your feelings about Iraq, Deployed is an important and compelling work that illuminates the real human cost of the war, and gives voice to those compelled to fight it. ---Ken Wells, Senior Editor, Conde Nast Portfolio Currently, there are few to no books dealing with the sociology of Iraq, and even fewer have empirical data on the experiences of American soldiers. More important, this work provides a strong and needed voice for soldiers---their words are compelling, rich, and moving. ---Morten Ender, Professor of Sociology, United States Military Academy at West Point This is a unique book that weaves historical, ethnographic, and organizational approaches for a study of Iraq-War military reservists. . . . the authors' findings challenge the pervading wisdom on reservists' motivations for service; the chemistry between family, reserve duty, and relations with regular military; and the effect that service in Iraq had on them. ---Jerry Lembcke, Associate Professor of Sociology, Holy Cross College What is it like to be one of the citizen-soldiers summoned to duty in Iraq and Afghanistan? The events of 9/11 were a call to arms for many reservists, as shock, anger, and fear propelled large numbers to volunteer for the opportunity to serve their country in the Middle East. Even the most patriotic, however, had not expected that the wars would last so long or that the Army Reserve would supply so much of the manpower. Using the soldiers' own voices, Deployed draws upon the life stories of members of an Army Reserve MP Company, who were called to extraordinary service after September 11. The book explores how and why they joined the Army Reserve, how they dealt with the seismic changes in their lives during and after deployment, the evolution of their relationships inside and outside their military unit, and their perspectives on the U.S. Army. Musheno and Ross uncover five pathways that led these citizens to join the reserves, showing how basic needs and cultural idioms combined to stimulate enlistments. Whatever path led to enlistment, the authors find that citizen-soldiers fall into three distinct categories: adaptive reservists who adjust quickly to the huge changes in their lives abroad and at home, struggling reservists whose troubles are more a product of homegrown circumstances than experiences specific to serving in a war zone, and reservists who are dismissive of military life while they live it and oppose the war even as they fight it. Perhaps most important, Deployed challenges the prevailing stereotype of returning soldiers as war-damaged citizens. Jacket photograph: AP Photo/Hutchinson News, Travis Morisse.
Visa hela texten

Michael Musheno is Professor and Chair in the Department of Criminal Justice Studies at San Francisco State University and Distinguished Affiliated Scholar at the Center for the Study of Law and Society at the University of California at Berkeley. Visit Musheno's websites at: http://bss.sfsu.edu/cjustice and http://bss.sfsu.edu/mmusheno. Susan M. Ross is Associate Professor of Sociology and Chair of Criminal Justice for Lycoming College in Williamsport, Pennsylvania.