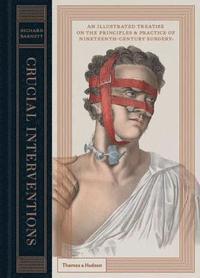 An Illustrated Treatise on the Principles & Practice of Nineteenth-Century Surgery.

av Richard Barnett
(2 röster)
Inbunden Engelska, 2015-10-26
242
Köp
Spara som favorit
The nineteenth century saw a complete transformation of the practice and reputation of surgery. Crucial Interventions follows its increasingly optimistic evolution, drawing from the very best examples of rare surgical textbooks with a focus on the extraordinary visual materials of the mid-nineteenth century. Unnerving and graphic, yet beautifully rendered, these fascinating illustrations include step-by-step surgical techniques paired with medical instruments and painted depictions of operations in progress. Arranged for the layman from head to toe, and accompanied by an authoritative, eloquent and inspiring narrative from medical historian Richard Barnett, author of 2014 bestseller The Sick Rose, Crucial Interventions is a unique and captivating book on one of the world's most mysterious and macabre professions, and promises to be another success.
Visa hela texten

'An extraordinary array of illustrations ... A book that will appeal to all lovers of medical history ' - British Journal of Hospital Medicine

Richard Barnett studied medicine before becoming a historian. His writing has appeared in The Lancet, The London Magazine and The Natural Death Handbook. His first book, Medical London: City of Diseases, City of Cures, was published in 2008 and was a Book of the Week on BBC Radio 4. His second book, The Sick Rose, published by Thames & Hudson, was the winner of The British Book Design and Production Awards. Richard has also appeared on BBC4's 'The Beauty of Anatomy'. He is currently Director of studies in History, Pembroke-King's Programme, University of Cambridge and Honorary Research Fellow, UCL.