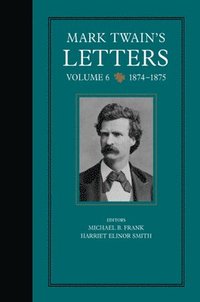 av Mark Twain, Michael Barry Frank, Harriet E Smith
Inbunden Engelska, 2002-11-01
832
Köp
Spara som favorit
Mark Twain's letters for 1874 and 1875 encompass one of his most productive and rewarding periods as author, husband and father, and man of property. He completed the writing of The Adventures of Tom Sawyer, published the major collection Sketches, New and Old, became a leading contributor to the Atlantic Monthly, and turned The Gilded Age, the novel he had previously coauthored with Charles Dudley Warner, into one of the most popular comedies of the nineteenth-century American stage. His personal life also was gratifying, unmarred by the family tragedies that had darkened the earlier years of the decade. He and his wife welcomed a second healthy daughter and moved into the showplace home in Hartford, Connecticut, that they occupied happily for the next sixteen years. All of these accomplishments and events are vividly captured, in Mark Twain's inimitable language and with his unmatched humor, in letters to family and friends, among them some of the leading writers of the day. The comprehensive editorial annotation supplies the historical and social context that helps make these letters as fresh and immediate to a modern audience as they were to their original readers. This volume is the sixth in the only complete edition of Mark Twain's letters ever attempted. The 348 letters it contains, many of them never before published, have been meticulously transcribed, either from the original manuscripts (when extant) or from the most reliable sources now available. They have been thoroughly annotated and indexed and are supplemented by genealogical charts, contemporary notices of Mark Twain and his works, and photographs of him, his family, and his friends.
Visa hela texten

"Few things, as Pudd'nhead observed, are harder to put up with than the annoyance of a good example, and this building collection of the letters is horribly, excruciatingly good. It sets standards of diligence that will cause future editors of writers' letters to weep."-Jonathan Raban, Times Literary Supplement "One of the most important collections of letters by an American author... admirably organized and set forth as to become a source of wonder to general readers and delight to advanced students of literary history"-Genevieve Stuttaford, Publishers Weekly "One of the great scholarly enterprises of the century. Since the 1970s the... members of the Mark Twain Project at the University of California have been turning out magnificent editions of the writer's letters, notebooks, travel narratives and fiction. If you want to enjoy, and to understand fully, the genius of Mark Twain, the California editions are the only texts to have."-Michael Shelden, London Telegraph

Michael B. Frank and Harriet Elinor Smith are both members of the Mark Twain Project of The Bancroft Library at the University of California, Berkeley.