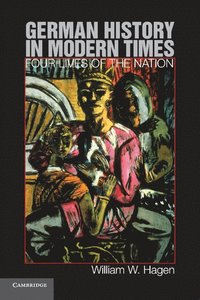 Four Lives of the Nation

av William W Hagen
Häftad Engelska, 2012-02-13
354
Köp
Spara som favorit
Finns även som
Visa alla 3 format & utgåvor
This history of German-speaking central Europe offers a very wide perspective, emphasizing a succession of many-layered communal identities. It highlights the interplay of individual, society, culture and political power, contrasting German with Western patterns. Rather than treating 'the Germans' as a collective whole whose national history amounts to a cumulative biography, the book presents the pre-modern era of the Holy Roman Empire; the nineteenth century; the 1914-45 era of war, dictatorship and genocide; and the Cold War and post-Cold War eras since 1945 as successive worlds of German life, thought and mentality. This book's 'Germany' is polycentric and multicultural, including the multinational Austrian Habsburg Empire and the German Jews. Its approach to National Socialism offers a conceptually new understanding of the Holocaust. The book's numerous illustrations reveal German self-presentations and styles of life, which often contrast with Western ideas of Germany.
Visa hela texten

"Bill Hagen has written a remarkable book that reconceptualizes the course of German history in several critical dimensions. Not only does Hagen take on and challenge several of the most conventional historiographical interpretations of the longue dure of German history (the Sonderweg thesis, etc.), but he shows in a very compelling way that one cannot understand German history in the twentieth century without a deep and profound knowledge of the history of the several competing German nations before 1866 and even before 1806. The result is an elegantly written book of great ambition and fascinating detail, particularly strong in social and political history and filled with surprising interpretive suggestions. The many illustrations, deeply integrated into the multiple, cascading narratives of the book, are also quite noteworthy." -John W. Boyer, University of Chicago

"Over a distinguished career William Hagen's histories have ranged masterfully across the fullest expanse of the German past, beginning in the long nineteenth century and continuing through the largest version of an early modern longue dure, before returning to the first half of the twentieth century. His themes have included the nationality conflicts of the Prussian east, early modern state formation and the character of absolutism, the relations of Junkers and villagers across four centuries, the transition from feudalism to capitalism, and the character of modern anti-semitism. He now brings this extraordinary depth of knowledge to an ambitiously conceived general history, whose varying notations of 'Germany' between the premodern Holy Roman Empire and the successive states of modern times (his 'four lives of the nation') cast a familiar landscape in exciting new light. In its dethroning of His Majesty the nation-state, attentiveness to the many different Germanies, and attunement to the ethico-political challenge of writing German history after Nazism, this is truly a history for our times." -Geoff Eley, University of Michigan

"This book is an extraordinary achievement by a leading authority in the field of German history. Lucid accounts of social and political continuity and change are set within a highly distinctive narrative architecture structured around the violent disruptions of modern German history. Rich in fresh and arresting insights and enlivened by vivid and beautifully illustrated individual portraits, German History in Modern Times is not just a masterpiece, but a deeply enjoyable read." -Christopher Clark, University of Cambridge

"William Hagen's strikingly original book offers a rich picture of the history of German-speaking Central Europe since the Reformation. Hagen treats neither Nazism nor market capitalism as natural or inevitable results of the many-sided history of this diverse region, but emphasizes contingencies-and the reversibility of developments like liberalism, authoritarianism, communist dictatorship, and...

William W. Hagen is Professor of History at the University of California, Davis. He has held fellowships from the Alexander von Humboldt Foundation, the National Endowment for the Humanities, the Max-Planck Society and the Institute for Advanced Study, Princeton. He is the author of Germans, Poles, and Jews: The Nationality Conflict in the Prussian East, 1772-1914 and the prize-winning Ordinary Prussians: Brandenburg Junkers and Villagers, 1500-1840 (Cambridge University Press, 2003). His wide-ranging research articles have appeared in many publications, including The Journal of Modern History, Foreign Affairs, the American Historical Review, Past and Present, Historische Zeitschrift and Geschichte und Gesellschaft.

1. Master narratives and rival interpretations of modern German history; Part I. German Central Europe before Modern Nationalism: 2. The pyramid of power in pre-modern Germany; 3. Baroque and Enlightenment Germany, 1648-1789; 4. Power states (Machtstaaten): the rise of the Prussian and Austrian military-bureaucratic monarchies; 5. Aufklrung: the German Enlightenment and other spirits of the age; Part II. German Identities between Liberalism, Nationalism, and Socialism, 1789-1914: 6. Revolution on the march: French challenge, German response, 1789-1815; 7. 'Land of poets and thinkers': the transition from Enlightenment universalism to German national culture; 8. Freedom and voice, 'blood and iron': the struggle over liberalism and nationalism, 1815-1914; 9. Power to the people: German social democracy in the age of industrialization; 10. Women, family, feminism, 1789-1914; 11. Habsburg Austria: a multinational path in German history; 12. Jews, Germans, German Jews, 1789-1914; Part III. Nation in Crisis: Defeat, Turmoil, Aggression, 1914-15: 13. The Prussian-German monarchy's sudden death: World War I and postwar revolution, 1914-20; 14. Democracy's bitter fruits: society and politics, 1918-33; 15. The rise of Hitlerism: middle-class discontent and populist utopia; 16. The 'people's community' at Hitler's command: national and socialist Germany, 1933-45; 17. Lebensraum: the war for empire in Eastern Europe; 18. Banned from nation and earth: German Jews after 1914, Nazi 'Jewish policy', and the Holocaust; Part IV. The Cold War Germanies and their Post-1989 Fusion: A Nation Reforged from Its Remnants?: 19. Return from the abyss: defeated Germany and the West German Federal Republic, 1949-89; 20. 'Real existing socialism': Soviet-occupied Germany and the German Democratic Republic, 1949-90; 21. Present-day Germany: the post-unification scene in West and East.