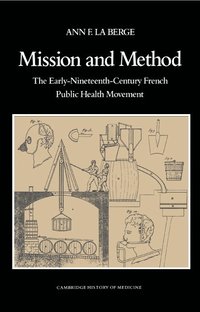 av Ann Elizabeth Fowler La Berge
Inbunden Engelska, 1992-09-01
1079
Köp
Spara som favorit
Finns även som
Visa alla 1 format & utgåvor
In Mission and Method Ann La Berge shows how the French public health movement developed within the socio-political context of the Bourbon Restoration and July Monarchy, and within the context of competing ideologies of liberalism, conservatism, socialism, and statism. The dialectic between liberalism, whose leading exponent was Villerme, and statism, the approach of Parent-Duchatelet, characterized the movement and was reflected in the tension between liberal and social medicine that permeated nineteenth-century French medical discourse. Professor La Berge also challenges the prevalent notion that the British were the leaders in the nineteenth-century public health movement and set the model for similar movements elsewhere. She argues that an active and influential French public health movement antedated the British and greatly influenced British public health leaders.
Visa hela texten

"...French physicians, pharmacists, and socially minded inquirers...are aptly described and anaylzed in Ann La Berge's excellent new book...La Berge has given us an understanding of the drive underlying their work." Evelyn B. Ackerman, Journal of the History of Medicine

"The text is written clearly in a style that does not bore the reader. Although directed at a specific audience, the treatise lends itself to general readership. I recommend this book to anyone wishing a clearer picture of the origins of modern public health at the begining of the last century in France." John E. Christ, Science Books and Films

"...a marvelous book filled from cover to cover with detailed insights into what life was really like in early nineteenth-century France, and in particular Paris. This book should be required reading for all nineteenth-century French scholars and for anyone interested in discovering the misery of life prior to the scientific understanding of infectious disease." Richard E. Peschel and Enid Peschel, Nineteenth Century French Studies

"...provides a useful synthesis of many concepts and ideas that until now have been scattered throughout a rapidly expanding body of literature focused on more specific topics within the movement. Because her study has a broader scope, Ann La Berge has opened the way to defining thorny concepts that have been taken for granted in the secondary literature, such as 'hygienists' and 'public health.' Catherine J. Kudlick, ISIS use

"Ann F. LaBerge's meticulous study of French public health between 1800 and 1850...is particularly instructive....the French public-health movement was largely a bourgeois discourse, providing copper-bottomed reasons for leaving much to the hidden hand, and explaining why direct modes of public-health intervention were doomed to disappointment. Ample evidence for this insightful reading is provided by Ann La Berge." R.P. Wilkinson, Times Literary Supplement

"...provides a comprehensive account of a subject of broad historical, cultural, and social significance. La Berge clearly articulates the complexities and controversies within the nineteenth-century French public health movement. Scholars of medicine, nursing, public health, and organizational history will find Mission and Method helpful to a broader understanding of the development of public health reform and idealogy." Barbara Brush, Book Reviews