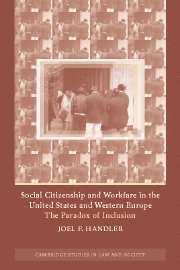 Social Citizenship and Workfare in the United States and Western Europe

The Paradox of Inclusion

av Joel F Handler
Häftad Engelska, 2004-04-01
509
Köp
Spara som favorit
Finns även som
Visa alla 3 format & utgåvor
This book compares workfare policies in the United States and 'active labor policies' in Western Europe that are aimed primarily at the long-term unemployed, unemployed youth, lone parents, immigrants and other vulnerable groups often referred to collectively as the 'socially excluded'. The Europeans maintain that workfare is the best method of bringing the socially excluded back into mainstream society. Although there are differences in terms of ideology and practice, Joel F. Handler argues that there are also significant similarities, especially field-level practices that serve to exclude those who are the least employable or lack other qualifications that agencies favor. The author also examines strategies for reform, including protective labor legislation, the Open Method of Coordination, the reform of social and employment services, and concludes with an argument for a basic income guarantee, which would not only alleviate poverty but also provide clients with an exit option.
Visa hela texten

"Handler provides a powerful critique of the trend from welfare to workfare." Comparative Labor Law and Policy Journal

Joel F. Handler is Richard C. Maxwell Professor of Law and Professor of Policy Studies at the University of California, Los Angeles.

Acknowledgements; 1. Introduction; 2. The American Welfare Reform: 'Ending welfare as we know it': The 'undeserving poor'; 'Ending welfare as we know it'; The 'work first' strategy; The low-wage labor market; The work experience of welfare recipients; The attitudes of welfare recipients; The decline in the welfare rolls and poverty; The future; Recommendations to make welfare really work; Social citizenship in the US; Some lessons from the American experience that might be applicable to Western Europe; 3. The European welfare states: social citizenship in the golden age; The challenge of unemployment; The impact on labor; Vulnerable groups: the socially excluded; Poverty; Right, center and left - questioning the welfare state; The 'third way': from status to contract; 4. Workfare in western Europe: the United Kingdom; Ireland; Sweden; Norway; Denmark; The Netherlands; France; Germany; Risks for the socially excluded; 5. Social Europe: alternatives? Conclusions? Solutions?; Part A. Social Europe: convergence vs. path-dependent; Negative vs. positive integration; Part B. Reform at the national level; Part C. Those who remain.