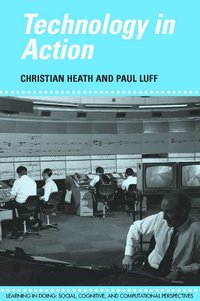 av Christian Heath
Häftad Engelska, 2000-06-01
494
Köp
Spara som favorit
Kan tyvärr inte levereras innan julafton.
Finns även som
Visa alla 2 format & utgåvor
Despite the extraordinary advances in digital and communication technology over recent years, we know very little about the way these complex systems affect everyday work and interaction. This book seeks to explore these issues through a series of video-based field studies. It begins by discussing the introduction of basic information systems in general medical practice and ends with an exploration of interpersonal communication in advanced media spaces; in the process also looking at news production, the control room of London Underground and computer aided design in architectural practice. Social interaction forms a particular focus of these studies as they explore the way individuals use various tools and technologies and coordinate their actions and activities with each other. The authors also show how video-based field studies of work and interaction can inform the design, development and deployment of new technology, in this valuable new resource for academics, researchers and practitioners.
Visa hela texten

'This excellent book does much to address the relationship between humans and technology in a truly encompassing way, by situating technology and its use in the broader human cognitive and social context, not just the context of the more typical computer-user dyad. In the absence of an understanding of what Lucy Suchman calls 'Situated Action', we shall remain doomed to violate human productivity and dignity with technologies which impose rather than invite; dominate rather than serve. Christian Heath and Paul Luff have given us a series of well-argued case studies which compellingly illustrate how a failure to take a broader view produces inferior technologies and also how the broader view can lead to truly productive technologies which empower rather than impoverish the human work experience.' John Mittlerer, Brock University