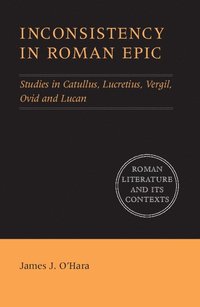 av James J O'Hara
Inbunden Engelska, 2007-04-01
900
Köp
Spara som favorit
Finns även som
Visa alla 2 format & utgåvor
How should we react as readers and as critics when two passages in a literary work contradict one another? Classicists once assumed that all inconsistencies in ancient texts needed to be amended, explained away, or lamented. Building on recent work on both Greek and Roman authors, this book explores the possibility of interpreting inconsistencies in Roman epic. After a chapter surveying Greek background material including Homer, tragedy, Plato and the Alexandrians, five chapters argue that comparative study of the literary use of inconsistencies can shed light on major problems in Catullus' Peleus and Thetis, Lucretius' De Rerum Natura, Vergil's Aeneid, Ovid's Metamorphoses, and Lucan's Bellum Civile. Not all inconsistencies can or should be interpreted thematically, but numerous details in these poems, and some ancient and modern theorists, suggest that we can be better readers if we consider how inconsistencies may be functioning in Greek and Roman texts.
Visa hela texten

"The argument is lucid and profitable. Any student of the Classics could learn a lot by following the author's concise examination of many of the major interpretative problems in Roman epic poetry."
James J. O'Hara, New England Classical Journal

"O'Hara's study is aimed at any reader, expert or not, interested in using literary theory to shed new light on contemporary issues in Roman epic." BMCR

"The book is written in a clear language which abstains from an artificially complicated vocabulary and convoluted sentences. O'Hara convincingly suggests many reasons why Roman poets chose discrepancies."
Journal of the Classical Association of Canada, Sabine Grebe, University of Guelph

James J. O'Hara is George L. Paddison Professor of Latin at the University of North Carolina, Chapel Hill. He is the author of Death and the Optimistic Prophecy in Vergil's Aeneid (1990) and True Names: Vergil and the Alexandrian Tradition of Etymological Wordplay (1996), as well as numerous articles and reviews on Latin literature.