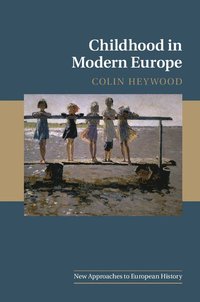 av Colin Heywood
Häftad Engelska, 2018-09-06
289
Köp
Spara som favorit
Finns även som
Visa alla 3 format & utgåvor
This invaluable introduction to the history of childhood in both Western and Eastern Europe between c.1700 and 2000 seeks to give a voice to children as well as adults, wherever possible. The work is divided into three parts, covering in turn, childhood in rural village societies during the eighteenth and nineteenth centuries; in the towns during the Industrial Revolution period (c.1750-1870); and in society generally during the late-nineteenth and twentieth centuries. Each part has a succinct introduction to a number of key topics, such as conceptions of childhood; infant and child mortality; the material conditions of children; their cultural life; the welfare facilities available to them from charities and the state; and the balance of work and schooling. Combining a chronological with a thematic approach, this book will be of particular interest to students and academics in a number of disciplines, including history, sociology, anthropology, geography, literature and education.
Visa hela texten

'Historians have started to wrench childhood from the historical shadows and explore its social, cultural and economic aspects. The result is a burgeoning and diverse literature. Colin Heywood, one of the early contributors, has pulled this literature together, ranging over modern Europe and employing ideas and arguments from sociology, anthropology, psychology, economics and social policy. The result is a masterly survey, a necessary addition to the libraries of teachers and students alike. But Heywood goes beyond a historiographical review to challenge a complacent or Panglossian view of the history of childhood. The book hammers home what we (especially children) have gained but also suggests what we (and especially children again) might have lost: an important read.' Jane Humphries, University of Oxford

'Colin Heywoods masterful survey examines important debates and major changes that defined the history of childhood in modern Europe. This marvellously accessible book traces key shifts in the realm of ideas while also bringing to light the remarkable diversity of children's experiences.' David M. Pomfret, The University of Hong Kong

'This new volume provides a welcome contribution to the history of childhood, focusing on conceptions of the child and developments in childhood in Europe, from the early eighteenth century until the turn of the twenty-first. The book is wide-ranging in its rich considerations of how work, education, science, health, economy and family have influenced and shaped the experience of childhood over time.' Heather Shore, Leeds Beckett University

'The transformation of childhood experience had an enormous impact in Europe as it modernised, and Colin Heywood's lucid and absorbing overview contributes significantly to the understanding of the processes involved. A significant strength is the breadth of coverage, including Russia and Eastern Europe as well as the better-known West. This is a major contribution to the social and cultural history of the period.' Catriona Kelly, University of Oxford

'Heywood ... fills a niche here with an up-to-date survey of childhood across modern Europe. After discussing premodern childhood, Heywood matches changes in childhood in modern Europe to trends of industrialization and the Enlightenment. Industrialization shifted rural children as well as adults to towns, where the children initially worked in factories as they had worked in the fields. Enlightenment thought viewed children as individuals to be respected and nurtured and prompted more-scientific approaches to child development and education - first among newly leisured middle- and upper-class children in the towns but eventually including working-class and rural children, slowly removing them from work and thus extending their childhoods. Rounding out this survey is discussion of the negotiation of childhood's boundaries and the growth of childhood culture, changes in children's material conditions, a...

Colin Heywood is Professor Emeritus of Modern French History at the University of Nottingham and is currently the honorary president of the Children's History Society. He is a Fellow of the Royal Historical Society and has served on the Committee of the Society for the History of Childhood and Youth. His previous books include Childhood in Nineteenth-Century France: Work, Health and Education Among the 'Classes Populaires' (Cambridge, 1988), and Growing Up in France: From the Ancien Rgime to the Third Republic (Cambridge, 2007).

Introduction; Part I. Childhood in the Villages, Eighteenth-Nineteenth Centuries: 1. Conceptions of childhood in rural society; 2. Growing up in the villages; 3. Work, education and religion for children in the countryside; Part II. Childhood in the Towns, c.1700-c.1870: 4. Enlightenment and Romanticism; 5. Middle- and upper-class childhoods in the towns, c.1700-1870; 6. The 'lower depths': working-class children in the early industrial town; 7. Work versus school during the Industrial Revolution; Part III. Childhood in an Industrial and Urban Society, c.1870-c.2000: 8. The scientific approach to childhood; 9. Growing up during the twentieth century (1): in the family and on the margins of society; 10. Growing up during the twentieth century (2): light and shade in an affluent society; 11. Work and school in an urban-industrial society; Conclusion.