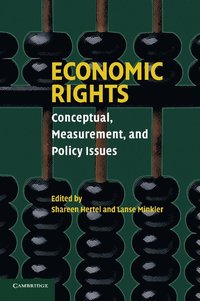 av Shareen Hertel
Häftad Engelska, 2007-08-01
469
Köp
Spara som favorit
Finns även som
Visa alla 2 format & utgåvor
This edited volume offers scholarship on economic rights by leading scholars in the fields of economics, law, and political science. It analyzes the central features of economic rights: their conceptual, measurement, and policy dimensions. In its introduction, the book provides a conceptualization of economic rights based on a three-pronged definition: the right to a decent standard of living, the right to work, and the right to basic income support for people who cannot work. Subsequent chapters correct existing conceptual mistakes in the literature, provide new measurement techniques with country rankings, and analyze policy implementation at the international, regional, national, and local levels. While it forms a cohesive whole, the book is nevertheless rich in contending perspectives.
Visa hela texten

Shareen Hertel is an Associate Professor of Political Science at the University of Connecticut and holds a joint appointment with the university's Human Rights Institute. She has served as a consultant to foundations, nongovernmental organizations (NGOs) and United Nations agencies in the United States, Latin America and South Asia. She is the author of Unexpected Power: Conflict and Change Among Transnational Activists (2006), co-editor of Human Rights in the United States: Beyond Exceptionalism (Cambridge University Press, 2011) and has published numerous scholarly articles. Hertel is incoming editor of The Journal of Human Rights and serves on the editorial boards of Human Rights Review, Human Rights and Human Welfare, and the International Studies Intensives book series of Paradigm Publishers. Lanse Minkler is an Associate Professor of Economics at the University of Connecticut and Director of Socio-Economic Rights at the University of Connecticut Human Rights Institute. Much of his research has concerned worker knowledge contributions and worker motivations. Most recently, he has been interested in the intersection between ethics and economics - resulting in the book Integrity and Agreement: Economics When Principles Also Matter (University of Michigan Press, forthcoming). His current research interests center on economic rights, most particularly on the right to work. He has recently served on the Editorial Board and as Associate Editor for the Review of Social Economy.