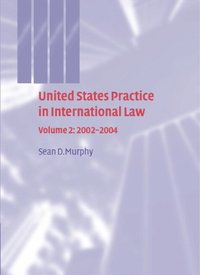 av Sean D Murphy
Inbunden Engelska, 2006-01-01
1849
Köp
Spara som favorit
Finns även som
Visa alla 2 format & utgåvor
Sean D. Murphy's in-depth survey of U.S. practice in international law in the period 2002-2004 draws upon the statements and actions of the executive, legislative and judicial branches of the U.S. government to examine its involvement across a range of areas. These areas include diplomatic and consular relations, jurisdiction and immunities, state responsibility and liability, international organizations, international economic law, human rights, and international criminal law. This summary of the most salient issues during 2002-2004 (ranging from the treatment of detainees during the Afghan conflict in the spring of 2002 to the invasion and occupation of Iraq in 2003-2004) was originally published in 2006, and is a central source of information about U.S. practice in international law. Revealing international law in the making, this essential tool for researchers and practitioners is the second in a series of books capturing the international law practice of a global player.
Visa hela texten

Review of the hardback: 'This volume for the years 2002-2004 maintains and indeed raises to a new level of accomplishment the standard of scholarly and comprehensive presentation of U.S. practice foreshadowed in Professor Murphy's first volume for the years 1999-2001. By the range and depth of its coverage, it provides a riveting description of what is actually going on in international law nowadays, as well outside the United States as in. Current research will be immensely aided by it and it could well serve also as a casebook for teaching purposes. Once opened, it is compelling reading. The promptness of its appearance is much to be praised.' Professor Sir Elihu Lauterpacht CBE QC, University of Cambridge

Review of the hardback: 'The first volume was received with great praise. The reception of this volume will be no less positive. Professor Murphy sets out United States practice - and reactions to that practice - in a comprehensive and balanced way. That practice is unmatched in its volume and its reach, and for no other State is as pervasive an international actor as is the United States. Whether that practice matches United States preachment is another question. But for that practice to be appraised, it must be made available. To that important end, Professor Murphy's renewed contribution is outstanding.' Stephen M. Schwebel, former President and Judge for the International Court of Justice

Review of the hardback: 'If Sean Murphy's first volume is an important resource for serious scholars and practitioners of international law, this second volume is all but indispensable. It covers a period in which United States practice has often been at the heart of extraordinary ferment in international law, from its encounters with the jus as bellum and the jus in bello, to the increasing number of judicial and arbitral decisions on international trade and investment. With a new generation of lawyers and judges voicing dissatisfaction with the instrumentalism of some secondary sources and demanding hard evidence of state practice to establish the existence of international obligations, a coherent presentation of primary sources by an author with extraordinary breadth of knowledge, interest and experience takes on ever greater importance. That Professor Murphy has been willing and able to meet this need without the direct government support that characterized such efforts in the past (and still characterizes them in other countries) is a tribute to his consummate dedication and skill. We are all in his debt.' Bernard H. Oxman, American Journal of International Law

Sean D. Murphy is Associate Professor of Law at the George Washington University. Before joining the Law School faculty in 1998, Professor Murphy served as legal counselor at the US Embassy in The Hague, arguing several cases before the International Court of Justice and representing the US government in matters before the International Criminal Tribunal for the former Yugoslavia, the Permanent Court of Arbitration, and The Hague Conference on Private International Law. He also served as US agent to the Iran-US Claims Tribunal, arguing cases on behalf of the US government and providing advice to US nationals appearing before that tribunal. His publications include an article on international environmental liability which won the American Journal of International Law 1994 Dak Prize for best scholarship by a younger author. In addition, his book Humanitarian Intervention: The United Nations in an Evolving World Order won the American Society of International Law 1997 Certificate for Preeminent Contribution to Creative Scholarship. He is the author of United States Practice in International Law, Volume 1: 1999-2001.