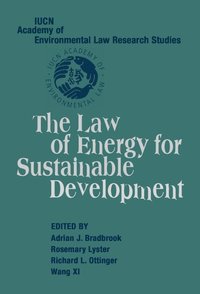 The Law of Energy for Sustainable Development

av Adrian J Bradbrook
Inbunden Engelska, 2005-01-01
1408
Köp
Spara som favorit
Finns även som
Visa alla 2 format & utgåvor
The research focus for the IUCN Academy of Environmental Law in 2003 was a timely and challenging one, entitled 'The Law of Energy for Sustainable Development'. As contemporary world politics demonstrates, energy resources and generation are crucial issues facing the international community. As research on energy law, at the international, regional, and national level is in its infancy, the insights provided by the contributors to this 2005 volume are a significant addition to the field.
Visa hela texten