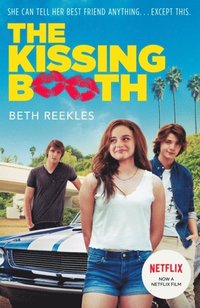 av Beth Reekles
(4 röster)
Häftad Engelska, 2013-04-22
93
Köp
Spara som favorit
Kan levereras innan julafton!
Finns även som
Visa alla 3 format & utgåvor
** Read the book behind the smash-hit Netflix film, starring Joey King! ** Meet Elle Evans: pretty, popular - and never been kissed. Meet Noah Flynn: badass, volatile - and a total player. When Elle decides to run a kissing booth for the school carnival, she never imagines she'll sit in it - or that her first ever kiss would be with bad boy Noah. From that moment, her life is turned upside down - but is this a romance destined for happiness or heartbreak? If you love Holly Bourne and John Green, then you will adore The Kissing Booth!
Visa hela texten

Beth Reekles penned her novel The Kissing Booth when she was fifteen and began uploading it to story-sharing platform Wattpad, where it accumulated over 19 million reads. She was signed by Random House UK at the age of seventeen, and offered a three-book deal whilst studying for her A Levels. Beth is now a Physics graduate from Exeter University and working in IT, and has had three books published with Random House: The Kissing Booth (which was made into a Netflix film in 2017), Rolling Dice, and Out of Tune. Beth is still writing and regularly blogs about writing advice and being a twenty-something. She has been shortlisted for the Women of the Future Young Star Award 2013, the Romantic Novel of the Year Awards 2014, and the Queen of Teen Awards 2014. She was named one of Time magazine's 16 Most Influential Teenagers 2013, and in August 2014 she was listed in The Times at No.6 on their 'Top 20 under 25' list.