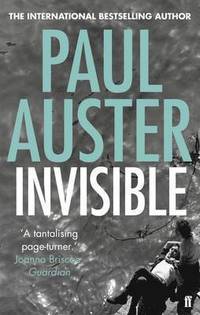 av Paul Auster
(2 röster)
Häftad Engelska, 2010-05-06
104
Köp
Spara som favorit
Finns även som
Visa alla 4 format & utgåvor
Sinuously constructed in four interlocking parts, Invisible opens in New York City in the spring of 1967 when twenty-year-old Adam Walker, an aspiring poet and student at Columbia University meets the enigmatic Frenchman Rudolf Born, and his silent and seductive girlfriend Margot. Before long, Walker finds himself caught in a perverse triangle that leads to a sudden, shocking act of violence that will alter the course of his life. Three different narrators tell the story, as it travels in time from 1967 to 2007 and moves from New York to Paris and to a remote Caribbean island in a story of unbridled sexual hunger and a relentless quest for justice. With uncompromising insight, Auster takes us to the shadowy borderland between truth and memory, authorship and identity to produce a work of unforgettable power that confirms his reputation as one of America's most spectacularly inventive writers.
Visa hela texten

Paul Auster is the best-selling author of Invisible, Moon Palace, Mr Vertigo, The Brooklyn Follies, The Book of Illusions and The New York Trilogy, among many other works. In 2006 he was awarded the Prince of Asturias Prize for Literature and inducted into the American Academy of Arts and Letters. Among his other honours are the Independent Spirit Award for the screenplay of Smoke and the Prix Medicis Etranger for Leviathan. He has also been short-listed for both the International IMPAC Dublin Literary Award (The Book of Illusions) and the PEN/Faulkner Award for Fiction (The Music of Chance). His work has been translated into more than thirty languages. He lives in Brooklyn, New York.