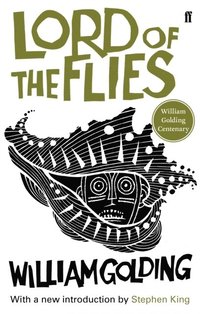 Lord of the Flies

with an introduction by Stephen King

av William Golding
(3 röster)
Häftad Engelska, 2011-08-04
102
Köp
Spara som favorit
Kan levereras innan julafton!
William Golding's Lord of the Flies is a dystopian classic: 'exciting, relevant and thought-provoking' (Stephen King). When a group of schoolboys are stranded on a desert island, what could go wrong? 'One of my favorite books - I read it every couple of years.' (Suzanne Collins, author of The Hunger Games) A plane crashes on a desert island. The only survivors are a group of schoolboys. By day, they discover fantastic wildlife and dazzling beaches, learning to survive; at night, they are haunted by nightmares of a primitive beast. Orphaned by society, it isn't long before their innocent childhood games devolve into a savage, murderous hunt ... 'Stands out mightily in my memory ... Such a strong statement about the human heart.' (Patricia Cornwell) 'Terrifying and haunting.' (Kingsley Amis) 'Beautifully written, tragic and provocative.' (E. M. Forster) ONE OF THE BBC'S ICONIC 'NOVELS THAT SHAPED OUR WORLD' What readers are saying: 'Every real human being should read this ... This is what we are.' 'It's brilliant, it's captivating, it's thought provoking and brutal and for some, its truly terrifying.' 'It can be read and re-read many times, and every time something new will appear.' 'There is a reason why this is studied at school ... Excellent read.' 'This is one of the few books I've read that I keep on my Kindle to read again.' 'I revisit this every few years and it's always fresh and impressive ... One of the best books I've ever read.'
Visa hela texten

William Golding (1911 - 1993) was born in Cornwall and educated in Marlborough and Oxford. Before becoming a writer, he was an actor, lecturer, small-boat sailor, musician and schoolteacher. In 1940 he joined the Royal Navy and took part in the D-Day operation and invasion of Holland. Lord of the Flies, his first novel, was rejected by several publishers but rescued from the 'slush pile' at Faber and published in 1954. It became a modern classic selling millions of copies, translated into 35 languages and made into a film by Peter Brook in 1963. Golding wrote eleven other novels, a play and two essay collections. He won the Booker Prize for Rites of Passage in 1980 and the Nobel Prize in Literature in 1983. He was knighted in 1988 and died in 1993. Recently, the Times ranked Golding third on their list of the 50 greatest British writers since 1945. www.william-golding.co.uk Stephen King (1947 - ) was born in Portland, Maine. He began writing in the 1960s and 1970s while working as an English teacher, King is now the award-winning author of more than fifty books, all worldwide bestsellers, including Carrie and The Shining. He is the recipient of the 2003 National Book Foundation Medal for Distinguished Contribution to the American Letters, the 2007 Grand Master Award from the Mystery Writers of America and the 2014 National Medal of Arts.