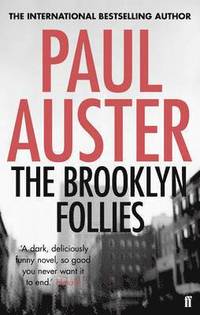 av Paul Auster
(2 röster)
Häftad Engelska, 2011-05-05
89
Köp
Spara som favorit
Finns även som
Visa alla 5 format & utgåvor
'I was looking for a quiet place to die. Someone recommended Brooklyn, and so the next morning I travelled down there from Westchester to scope out the terrain . . .'So begins Paul Auster's remarkable new novel, The Brooklyn Follies. Set against the backdrop of the contested US election of 2000, it tells the story of Nathan and Tom, an uncle and nephew double-act. One in remission from lung cancer, divorced, and estranged from his only daughter, the other hiding away from his once-promising academic career, and, indeed, from life in general.Having accidentally ended up in the same Brooklyn neighbourhood, they discover a community teeming with life and passion. When Lucy, a little girl who refuses to speak, comes into their lives, there is suddenly a bridge from their pasts that offers them the possibility of redemption. Infused with character, mystery and humour, these lives intertwine and become bound together as Auster brilliantly explores the wider terrain of contemporary America - a crucible of broken dreams and of human folly. 'Auster at the top of his game. This superb novel about human folly turns out to be tremendously wise.' New Statesman
Visa hela texten

Paul Auster is the best-selling author of Invisible, Moon Palace, Mr Vertigo, The Brooklyn Follies, The Book of Illusions and The New York Trilogy, among many other works. In 2006 he was awarded the Prince of Asturias Prize for Literature and inducted into the American Academy of Arts and Letters.Among his other honours are the Independent Spirit Award for the screenplay of Smoke and the Prix Medicis Etranger for Leviathan. He has also been short-listed for both the International IMPAC Dublin Literary Award (The Book of Illusions) and the PEN/Faulkner Award for Fiction (The Music of Chance). His work has been translated into more than thirty languages.He lives in Brooklyn, New York.