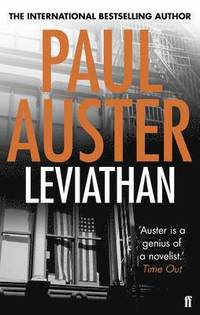 av Paul Auster
(1 röst)
Häftad Engelska, 2011-05-05
89
Köp
Spara som favorit
Finns även som
Visa alla 3 format & utgåvor
Six days ago, a man blew himself up by the side of a road in northern Wisconsin...The explosion that detonates the narrative of Paul Auster's remarkable novel also ends the life of its hero, Benjamin Sachs, and brings two FBI agents to the home of one of Sachs' oldest friends, the writer Peter Aaron. What follows is Aaron's story, an intricate, subtle and gripping investigation of another man's life in all its richness and complexity.
Visa hela texten

Paul Auster was born in Newark, New Jersey in the United States in 1947. After attending Columbia University, he lived in France for four years. Since 1974 he has published poems, essays, novels, screenplays and translations. He was the editor of the short story anthology, True Tales of American Life. He lives in Brooklyn, New York.