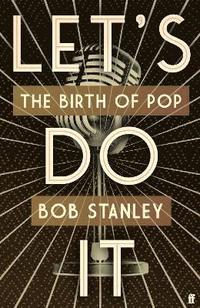 The Birth of Pop

av Bob Stanley
(1 röst)
Inbunden Engelska, 2022-05-05
286
Köp
Spara som favorit
Finns även som
Visa alla 2 format & utgåvor
The prequel to Bob Stanley's universally acclaimed Yeah Yeah Yeah, Let's Do It is the only book that brings together all genres to tell the definitive story of the birth of Pop, from 1900 to the mid-fifties. 'An absolute landmark/joy/gossip-fest/door to Narnia: the history of pop music before rock'n'roll. Fascinating. I can't recommend it enough.' CAITLIN MORAN 'An encyclopaedic introduction to the fascinating and often forgotten creators of Anglo-American hit music in the first half of the Twentieth Century.' NEIL TENNANT 'A perfect guidebook, filled with smart thinking and the kind of communicable enthusiasm that sends you rushing to the nearest streaming service, eager to hear what all the fuss was about.' ALEXIS PETRIDIS, GUARDIAN Pop music didn't begin with the Beatles in 1963, or with Elvis in 1956, or even with the first seven-inch singles in 1949. There was a pre-history that went back to the first recorded music, right back to the turn of the century . . . Who were the earliest record stars, and were they in any meaningful way 'pop stars'? Who were the likes of George Gershwin writing songs for? Why did swing, the hit sound for a decade or more, become almost invisible after the Second World War? The prequel to Bob Stanley's Yeah Yeah Yeah, Let's Do It is the first book to tell the definitive story of the birth of pop, from the invention of the 78 rpm record at the end of the nineteenth century to the beginnings of rock and the modern pop age. Taking in superstars such as Louis Armstrong, Bessie Smith, Duke Ellington and Frank Sinatra alongside the unheralded songwriters and arrangers behind some of our most enduring songs, Stanley paints an aural portrait of pop music's formative years in stunning clarity, uncovering the silver threads and golden needles that bind the form together. Bringing the eclectic, evolving world of early pop to life - from ragtime, blues and jazz to Broadway, country, crooning and beyond - Let's Do It is essential reading for all music lovers. 'Stanley has provided something invaluable to the growing numbers who get their music via streaming services: a guide to pop's back pages, where artists mostly remembered in sepia tones are brought into vivid colour by the author's enthusiastic sense of discovery.' BILLY BRAGG, NEW STATESMAN 'Inspired.' THE TIMES 'Remarkable.' CLASSIC ROCK 'Exhilarating.' CAUGHT BY THE RIVER 'Essential.' DAILY TELEGRAPH 'A joyous read.' THE ECONOMIST 'Wholly entertaining.' MOJO 'Enthralling.' DAILY MAIL 'Great fun.' LITERARY REVIEW 'Colossal.' UNCUT 'A joy.' RECORD COLLECTOR 'A triumph.' LOUD & QUIET
Visa hela texten

Bob Stanley is a writer, musician, DJ, and film producer. Since founding influential pop group Saint Etienne, Bob has enjoyed a parallel career as a music journalist, contributing to publications such as the Times, Smash Hits, NME, the Guardian and the Face. A former artist-in-residence at the Southbank Centre, his films have been shown at the ICA and Royal Festival Hall, and he has curated several seasons for the Barbican. He is the author Yeah Yeah Yeah, which was the Sunday Times Pop Music Book of the Year and a Rough Trade Book of the Year. His previous book was Excavate: The Wonderful and Frightening World of The Fall, co-edited with Tessa Norton.