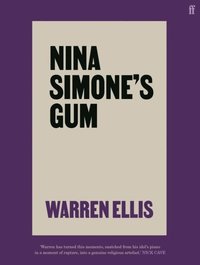 A Memoir of Things Lost and Found

av Warren Ellis
(3 röster)
Inbunden Engelska, 2021-09-02
192
Köp
Spara som favorit
Finns även som
Visa alla 2 format & utgåvor
THE TIMES TOP 10 BESTSELLER A GUARDIAN, TELEGRAPH, THE TIMES, IRISH TIMES, SUNDAY EXPRESS, ROUGH TRADE, MOJO, CLASH, ROLLING STONE, UNCUT BOOK OF THE YEAR From award-winning musician and composer Warren Ellis comes the unexpected and inspiring story of a piece of chewing gum. FEATURING AN INTRODUCTION BY NICK CAVE I hadn't opened the towel that contained her gum since 2013. The last person to touch it was Nina Simone, her saliva and fingerprints unsullied. The idea that it was still in her towel was something I had drawn strength from. I thought each time I opened it some of Nina Simone's spirit would vanish. In many ways that thought was more important than the gum itself. On Thursday 1 July, 1999, Dr Nina Simone gave a rare performance as part of Nick Cave's Meltdown Festival. After the show, in a state of awe, Warren Ellis crept onto the stage, took Dr Simone's piece of chewed gum from the piano, wrapped it in her stage towel and put it in a Tower Records bag. The gum remained with him for twenty years; a sacred totem, his creative muse, a conduit that would eventually take Ellis back to his childhood and his relationship with found objects, growing in significance with every passing year. Nina Simone's Gum is about how something so small can form beautiful connections between people. It is a story about the meaning we place on things, on experiences, and how they become imbued with spirituality. It is a celebration of artistic process, friendship, understanding and love. 'The year's most eccentric and joyful musical memoir.' DAILY TELEGRAPH (Books of the Year) 'A meditation on art and value, connection and collaboration [...] Fantastic.' THE TIMES (Books of the Year) 'One of the most strange, illuminating and wonderful 'music' books ever.' MOJO (Books of the Year)
Visa hela texten

Warren Ellis is an Australian multi-instrumentalist and composer, most famous for his work as collaborator and bandmate of Nick Cave, in both the Bad Seeds and Grinderman. Both solo and alongside Nick he is also a multi-awardwinning film composer whose soundtracks include The Proposition, The Road, The Assassination of Jesse James by the Coward Robert Ford, Mustang and most recently This Train I Ride. His own band Dirty Three have released eight studio albums since 1994 and he is an in-demand producer and writer, working with artists including Marianne Faithful, Jupiter and Okwess and Tinariwen.