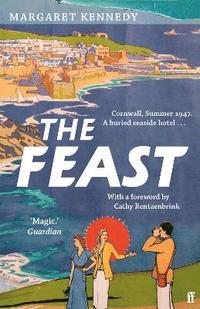 av Margaret Kennedy, Cathy Rentzenbrink
Häftad Engelska, 2021-06-03
118
Köp
Spara som favorit
This summer holiday vintage classic exploring the mystery of a buried Cornish hotel invites us to solve the puzzle as detectives: perfect for Agatha Christie fans, with a dash of Richard Osman ... 'I am loving it!' Nigella Lawson 'Hilarious and perceptive ... Perfect.' Daily Mail 'Entertaining, beautifully written, and profound.' Tracy Chevalier 'Tense, touching, human, dire, and funny ... A feast indeed.' Elizabeth Bowen 'Kennedy is not only a romantic but an anarchist.' Anita Brookner 'Oh boy, what a treat; wonderfully sharp and funny ... Page-turningly good!' Lissa Evans 'So full of pleasure that you could be forgiven for not seeing how clever it is.' Cathy Rentzenbrink (foreword) Cornwall, Midsummer 1947. Pendizack Manor Hotel is buried in the rubble of a collapsed cliff. Seven guests have perished, but is it murder, and what brought this strange assembly together for a moonlit feast before this Act of God - or Man? Over the week before the landslide, we meet the hotel guests in all their eccentric glory: and as friendships form and romances blossom, sins are revealed, and the cliff cracks widen .. Reader Reviews: 'One of the best books I have ever read ... Viva Ms. Kennedy, you were truly marvellous!' ***** 'The best book I've ever read. Yes, I know that's a big statement! Kennedy is quickly becoming my all-time favorite author ... A first-rate literary genius.' ***** 'This is bar none, one of the best books I have ever read.' ***** 'Offers us the chance to solve a very unusual kind of mystery ... An unexpectedly engaging literary game.' **** 'A magnificent rediscovery ... Kennedy's masterpiece is a searing and unflinching look at postwar England ... Elegantly and tartly written, this smart and haunting novel offers one of the most unforgettable endings ... A brilliant and moving literary feast to be enjoyed without any moderation! ***** 'I'm longing to read this again! Clever Kennedy! Is it a thriller? Is it a morality play or an exploration of divine justice? Or is it a family/village saga and maybe even a romance? ... Terrifically readable with a marvellous cast.' ***** 'Such a good idea, and brilliantly executed ... I was unable to stop reading, absorbed completely in the company of the motley group. It's almost like you're eavesdropping on them. After finishing it, I find myself still thinking about it ... A fabulous read.' ***** 'One of my favorite kinds of books: a forgotten treasure..' *****
Visa hela texten

Margaret Kennedy was born in London in 1896 and read History at Somerville College, Oxford in 1915 (alongside Winifred Holtby and Vera Brittain) where she began writing. In 1924, Kennedy's second novel The Constant Nymph became a worldwide bestseller which she adapted into a hit West End play starring Noel Coward (three different star-studded film versions followed). Described as 'superb' by Elizabeth Bowen, Kennedy wrote fifteen further prize-winning novels including The Feast in 1950, as well as literary criticism and a biography of Jane Austen. She died in 1967. Cathy Rentzenbrink is the prize-winning author of The Last Act of Love and A Manual for Heartache and Dear Reader: The Comfort and Joy of Books. She speaks and writes regularly on life, death, love, literature, literacy and mental health, and is often to be found doing bookish events at festivals, in shops and libraries, and in prisons.