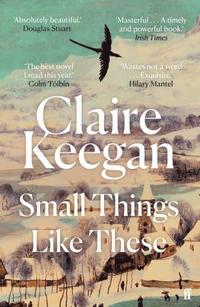 Shortlisted for the Booker Prize 2022

av Claire Keegan
Häftad Engelska, 2022-11-03
127
Köp
Spara som favorit
Finns även som
Visa alla 2 format & utgåvor
** A Book of the Year in The Times - The New Statesman - Observer - Financial Times - Irish Times - Irish Independent - Times Literary Supplement ** WINNER OF THE ORWELL PRIZE AND THE KERRY GROUP IRISH NOVEL OF THE YEAR AWARD SHORTLISTED FOR THE RATHBONES FOLIO PRIZE AND THE IRISH NOVEL OF THE YEAR AT THE DALKEY LITERARY AWARDS 'Exquisite.' Damon Galgut 'Masterly.' The Times 'Miraculous.' Herald 'Astonishing.' Colm Toibin 'Stunning.' Sunday Independent 'Absolutely beautiful.' Douglas Stuart It is 1985, in an Irish town. During the weeks leading up to Christmas, Bill Furlong, a coal and timber merchant, faces into his busiest season. As he does the rounds, he feels the past rising up to meet him - and encounters the complicit silences of a people controlled by the Church.
Visa hela texten

Claire Keegan's stories are translated into thirty languages. Antarctica won the Rooney Prize for Irish Literature. Walk the Blue Fields won the Edge Hill Prize, awarded to the best collection of stories published in the British Isles. Foster won the Davy Byrnes Award, one of the richest literary prizes in the world, and was last year chosen by The Times as one of the top fifty works of fiction to be published in the twenty- first century. Small Things Like These was shortlisted for the 2022 Booker Prize, and for the Rathbones Folio Prize, awarded for the best work of literature, regardless of form, to be published in the English language, and won the Kerry Group Irish Novel of the Year Award and the Orwell Prize for Political Fiction.