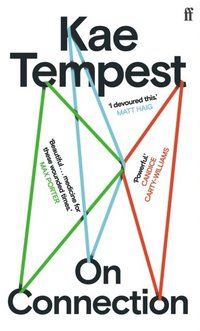 av Kae Tempest
Häftad Engelska, 2022-03-17
105
Köp
Spara som favorit
Finns även som
Visa alla 1 format & utgåvor
Beneath the surface we are all connected . . . 'An authentically soothing, powerful, thought-provoker.' MATT HAIG 'On Connection is medicine for these wounded times.' MAX PORTER 'On Connection came to me when I needed it most, and reminded me that the links we have to places, people, words, ourselves, are what keep us alive.' CANDICE CARTY-WILLIAMS This is a book about connection. About how immersing ourselves in creativity can help us cultivate greater self-awareness and bring us closer to each other. Drawing on two decades of experience as a writer and performer, Kae Tempest champions the role of creativity - in whatever form we choose to practice it - as an act of love, helping us establish a deeper relationship to our true selves, and to others and the world we live in. Honest, hopeful and written with piercing clarity, On Connection is an inspiring personal meditation that will transform the way you see the world. 'Persuasive and profound.' OBSERVER 'Tempest's prose is crisp and thoughtful.' NEW STATESMAN
Visa hela texten

Kae Tempest is an award-winning, Sunday Times-bestselling author, poet and recording artist. Tempest won the 2013 Ted Hughes Award, was nominated for a Costa Book Award and a BRIT Award, has been shortlisted for the Mercury Prize twice and was nominated for two Ivor Novello Awards. They were also named a Next Generation Poet by the Poetry Book Society, a decennial accolade. They released their fourth studio album, The Book of Traps and Lessons, in 2019, produced by Rick Rubin. Tempest grew up in South-East London, where they still live today. @kaetempest