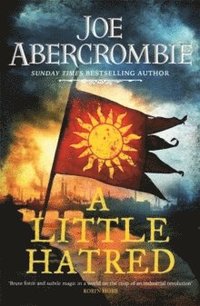 The First in the Epic Sunday Times Bestselling Series

av Joe Abercrombie
Häftad Engelska, 2020-05-14
116
Köp
Spara som favorit
Finns även som
Visa alla 1 format & utgåvor
WAR. POLITICS. REVOLUTION. THE AGE OF MADNESS HAS ARRIVED . . . 'Funny and sardonic, violent and compelling' Guardian 'A tale of brute force and subtle magic on the cusp of an industrial revolution ... Buckle your seat belts for this one' Robin Hobb * * * * * * * * * * * * * * * On the battlefields of the North, the next generation of would-be heroes rushes to make the same bloody mistakes as the last. While the age of the machine dawns, the age of magic refuses to die. One might glimpse the future, through the curse of the Long Eye, but changing it is another matter altogether. The chimneys of industry rise, the cities seethe with opportunity, and even kings must kneel before the new power of the banks. But in the slums, anger is brewing, and soon it will boil over with a rage that all the money in the world cannot control . . . Introducing a cast of unforgettable new characters, A LITTLE HATRED begins a new First Law trilogy which will have you gripped from the very start ... * * * * * * * * * * * * * * * 'Crammed with characters and detail, the intricately woven story never slackens its merciless grip' Daily Mail 'A masterpiece of fantasy fiction' Starburst 'Could scratch an itch for anyone missing Game of Thrones' Den of Geek 'One of Abercrombie's best books yet' SFX 'Will keep you up long after bedtime' The Sun
Visa hela texten

Highly recommended - a funny, finely-wrought, terrifically energetic work of high fantasy. Seek it out -- Joe Hill The intricately woven story never slackens its merciless grip as we follow our heroes and heroines through battlefields, boardrooms and bedrooms to their destinies - deserved and undeserved alike. * Daily Mail * He writes of slum life with graphic realism, and his rendering of battle scenes is to die for. * The Guardian * Goddamn magnificent * Adrian Tchaikovsky * A tale of brute force and subtle magic set in a world on the cusp of an industrial revolution . . . a vivid and jolting tale. * ROBIN HOBB * The books are good, really good. They pulled me in. Well-developed world. Unique, compelling characters. I like them so much that when I got to the end of the second book and found out the third book wasn't going to be out in the US for another three months, I experienced a fit or rage, then a fit of depression, then I ate some lunch and had a bit of lay down' Witty, bloody and fun. * NICHOLAS EAMES * Joe Abercrombie writes with terrifying wit, humour and heart * Ben Aaronovitch * A new epic saga of war and power set in a world where the industrial age is rising . . . With expert craft, Abercrombie lays the groundwork for another thrilling trilogy * Publishers Weekly starred review * Rife with emotion with wit to spare, both honed to an effortlessly fine edge. A Little Hatred is the joy of watching a master of the craft with his tools at their sharpest * Sam Sykes, author of Seven Blades of Black * Joe Abercrombie's powerful voice raises the bar in any literary genre. Fantasy fans are beyond fortunate he chose this one * Myke Cole, author of The Armored Saint * This book is exceptional. Indisputably, spectacularly, criminally good. Clever, funny, and packed with cutting commentary, it's well worth the wait. * FANTASY BOOK REVIEW * Abercrombie has created one of the most magnificent, unforgettable casts of characters to ever grace the pages of a fantasy book * Grimdark Magazine * Gripping and intriguing. * STARBURST MAGAZINE * All told within a complex, fascinating plot that will keep you up long after bed time. The perfect escape from the topsy- turvy world that we're living in at the moment. -- Natasha Harding * The Sun * Both the magic and the class struggle are subtly handled by Abercrombie, while the humour is delightfully rough. It's a tremendous book, as if Friedrich Engels and Terry Pratchett had agreed to collaborate in rewriting George RR Martin. * MORNING STAR * [it] gives us incipient industrialisation, a refugee crisis, violence, politics and magic, all handled with darkly funny aplomb. * The Guardian, Books of the Year 2019 * This is an ambitious and engrossing return to the world of the First Law. Bring on book two. * SciFiNow * Little Hatred is one of Abercrombie's best books yet. * SFX *