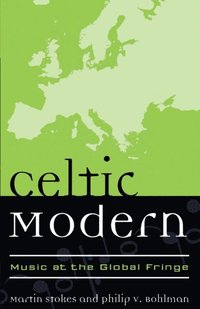 Music at the Global Fringe

av Martin Stokes, Philip V Bohlman
E-bok (EPUB - DRM), Engelska, 2003-09-15
897
Ladda ned
Spara som favorit
Ladda ned och läs i en e-boksläsare. Tips på appar
Finns även som
Visa alla 2 format & utgåvor
The study of 'Celtic' culture has been locked within modern nationalist paradigms, shaped by contemporary media, tourism, and labor migration. Celtic Modern collects critical essays on the global circulation of Celtic music, and the place of music in the construction of Celtic 'Imaginaries'. It provides detailed case studies of the global dimensions of Celtic music in Scotland, Wales, Ireland, Brittany, and amongst Diasporas in Canada, the United States and Australia, with specific reference to pipe bands, traditional music education in Edinburgh, the politics of popular/traditional crossover in Ireland, and the Australian bush band phenomenon. Contributors include performer musicians as well as academic writers. Critique necessitates reflexivity, and all of the contributors, active and in many cases professional musicians as well as writers, reflect in their essays on their own contributions to these kind of encounters. Thus, this resource offers an opportunity to reflect critically on some of the insistent 'othering' that has accompanied much cultural production in and on the Celtic World, and that have prohibited serious critical engagement with what are sometimes described as the 'traditional' and 'folk' music of Europe.
Visa hela texten

...the collection is necessary for academic consideration of the Celtic genre and is consequently thought-provoking?strikingly so on the issues of commercialism and the integration of innovation into tradition.

Martin Stokes is Associate Professor of Music and also the College Lecturer in Social Anthropology and Ethnomusicology at the University of Chicago. He has won the Leverhulme Trust award, the Curl Lectureship from London's Royal Anthropological Institute, a fellowship from the Howard Foundation, and a residential fellowship from the Franke Humanities Institute at the University of Chicago. Philip V. Bohlman is the Mary Werkam Professor of Music and Jewish Studies, and of the Humanities at the University of Chicago, where he is also chair of Jewish Studies. His research and publications cover a wide range of topics, from folk and popular music in Europe and North America, music and religion, the Middle East, and the intersections of music with nationalism and racism. Among his most recent publications are World Music: A Very Short Introduction (2002), The Folk Songs of Ashkenaz (with Otto Holzapfel, 2001), and Music and the Racial Imagination (coedited with Ronald Radano, 2000). The Music of European Nationalism: Political Change and Modern History is forthcoming.