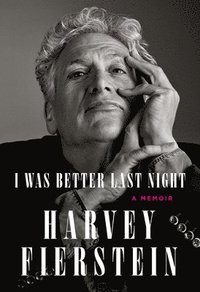 I Was Better Last Night

Harvey Fierstein's stellar career has taken him from Broadway to Hollywood and back. He's received accolades and awards for acting-Hairspray, Fiddler, Mrs. Doubtfire, Independence Day-and writing: La Cage Aux Folle, Torch Song Trilogy (for which he also won a Tony for acting) and Kinky Boots. But while he is widely known as one of today's most peerless performers, Harvey has never shared his own story until now.

He takes us from his childhood in Bensonhurst, Brooklyn-born in 1954, he was an eccentric, musical-loving boy-to performing in Andy Warhol's Pork at LaMama in 1971, to becoming an outspoken advocate for gay rights to his soaring career on Broadway and in Hollywood. And Harvey's candid recollections give us, as well, a rich picture of downtown New York City life and gay culture, the evolution of theater over the course of his career, and a moving account of his family's journey of acceptance. I Was Better Last Night is filled with wisdom gained, mistakes made, and stories that come together to describe an extraordinarily colorful, entertaining, and meaningful life. Luckily for us all, his wonderfully unique and recognizable voice is as engaging, funny, and vulnerable on the page.