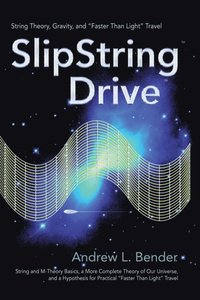 av Andrew L Bender
E-bok (EPUB - DRM), Engelska, 2006-11-15
90
Ladda ned
Spara som favorit
Ladda ned och läs i en e-boksläsare. Tips på appar
Written for amateur physicists, SlipString Drive takes you through the basics of string and M-theories so that you can embark on a faster than light voyage without violating physics. By using gravity waves to completely isolate volumes of space-time from the rest of the universe, author Andrew L. Bender proposes a method of travelsimilar to going through a wormholethat could be possible within fifty years. He also details a unique engine design for producing the gravity waves necessary to travel in such a manner. In SlipString Drive, Bender describes how ships using this method of propulsion would appear to those outside of the ships partially gravitationally isolated region of space while maneuvering at slow speeds. Bender also discusses novel uses for such a vessel, such as saving humanity from comets to supernovae. Bender also offers a Membrane Theory of Gravity. A modification of the M-theory, this new theory unifies all forces, and predicts dark matter and energy. It also theorizes how the acceleration of our universe will change over time, along with other predictions that could prove modified M-theory correct observationallya feat no other cosmologist has yet achieved. Finally, Bender hypothesizes how the universe will end, and how your descendants could survive until that fateful occurrence.
Visa hela texten