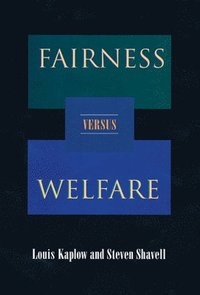 av Louis Kaplow, Steven Shavell
Häftad Engelska, 2006-10-01
709
Köp
Spara som favorit
By what criteria should public policy be evaluated? Fairness and justice? Or the welfare of individuals? Debate over this fundamental question has spanned the ages. Fairness versus Welfare poses a bold challenge to contemporary moral philosophy by showing that most moral principles conflict more sharply with welfare than is generally recognized. In particular, the authors demonstrate that all principles that are not based exclusively on welfare will sometimes favor policies under which literally everyone would be worse off. The book draws on the work of moral philosophers, economists, evolutionary and cognitive psychologists, and legal academics to scrutinize a number of particular subjects that have engaged legal scholars and moral philosophers. How can the deeply problematic nature of all nonwelfarist principles be reconciled with our moral instincts and intuitions that support them? The authors offer a fascinating explanation of the origins of our moral instincts and intuitions, developing ideas originally advanced by Hume and Sidgwick and more recently explored by psychologists and evolutionary theorists. Their analysis indicates that most moral principles that seem appealing, upon examination, have a functional explanation, one that does not justify their being accorded independent weight in the assessment of public policy. Fairness versus Welfare has profound implications for the theory and practice of policy analysis and has already generated considerable debate in academia.
Visa hela texten

Patient, thorough, unfailingly lucid, the authors take apart, brick by brick, the edifice of the dominant school of modern moral and legal philosophy with its insistence that social policy as well as personal decision making be based on notions of fairness, right, and justice distinct from utility or welfare. They show that human welfare is a far better criterion, and that philosophers' (and many policy makers') fairness notions, rather than simply lying along a different track from welfare, would if implemented diminish it. They seek to reinterpret fairness, in line with its social and psychological roots, as compatible with rather than contradicting welfare. Their close and compelling engagement with the arguments of their opponents makes this a book that philosophers as well as policy analysts will find difficult to refute and impossible to ignore. -- Richard A. Posner Normative economic analysis is dominated by the simple Pareto principle: what makes everyone better off should be preferred. The authors apply this principle to a great variety of policy issues and oppose it to considerations of fairness not derivable from individual well-being. They show in case after case that the welfare doctrine leads to superior and consistent implications. The book is a model of careful reasoning and illustrates the great value of a consistent viewpoint in evaluating public policy. -- Kenneth J. Arrow This is an outstanding piece of analysis. Kaplow and Shavell have already established themselves as brilliant and imaginative scholars in the area of economic analysis of law. This work represents the systematic application of the principles of legal-economic thinking to the analysis of the basic policy justifications for legal rules. -- Geoffrey Miller, New York University School of Law This is an extremely important book. It might have lasting influence on the law. If it did have such influence, people would be better off. It is an attempt to bring to bear on legal policy the perspective of welfare economics. It differs from most previous writing in the law-and-economics tradition, because it takes welfare economics as a normative theory, a criterion for evaluation, rather than a "positive" or empirical theory of how the law actually works. Because it takes the theory as normative, it must defend the theory on philosophical grounds. It does this in a sophisticated way, drawing on modern utilitarian philosophy, and inventing, when needed, new philosophical arguments. -- Jonathan Baron, University of Pennsylvania [Kaplow and Shavell] challenge [the] conventional wisdom. They argue that what matters most is whether a particular policy promotes the general welfare, saying "we discover very little basis for the use of notions of fairness as independent evaluative principles"...Fairness Versus Welfare is academically rigorous and intellectually challenging. Kaplow and Shavell have rolled a philosophical hand grenade into the practical world of policy. -- Doug Bandow * Washington Times * Kaplow and Shavell...coauthored this interdisciplinary and systematic study that addresses the issue of what philosophical standards are preferable in the formulation and assessment of public policy, particularly a legal system...Their work aims to identify key normative moral principles that may defensibly be used to assess legal policy and rules. The book's main thesis is that a welfare-based norm (how the overall well-being of individuals is effected) should be used both to justify the selection of legal rules and in normative legal analysis generally...The authors display a masterful command of the relevant scholarly literature...Highly recommended. -- A. S. Rosenbaum * Choice * Fairness versus Welfare aspires to be the new manifesto for normative law and economics...This new brief for normative law and economics is, substantively, a genuine advance over the traditional commitment to wealth maximization. -- Matthew Adler * Ethic