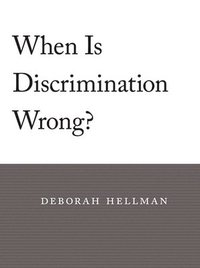 When Is Discrimination Wrong?

av Deborah Hellman
Häftad Engelska, 2011-04-10
499
Köp
Spara som favorit
Finns även som
Visa alla 1 format & utgåvor
A law requires black bus passengers to sit in the back of the bus. The U.S. Food and Drug Administration approves a drug for use by black heart failure patients. A state refuses to license drivers under age 16. A company avoids hiring women between the ages of 20 and 40. We routinely draw distinctions among people on the basis of characteristics that they possess or lack. While some distinctions are benign, many are morally troubling. In this boldly conceived book, Deborah Hellman develops a much-needed general theory of discrimination. She demonstrates that many familiar ideas about when discrimination is wrong-when it is motivated by prejudice, grounded in stereotypes, or simply departs from merit-based decision-making-won't adequately explain our widely shared intuitions. Hellman argues that, in the end, distinguishing among people on the basis of traits is wrong when it demeans any of the people affected. She deftly explores the question of how we determine what is in fact demeaning. Claims of wrongful discrimination are among the most common moral claims asserted in public and private life. Yet the roots of these claims are often left unanalyzed. When Is Discrimination Wrong? explores what it means to treat people as equals and thus takes up a central problem of democracy.
Visa hela texten

Although democracy is committed to an ideal of equal treatment, we do not always agree on what that commitment requires. In this bold effort to work out when we may morally draw distinctions among people, Deborah Hellman unearths assumptions and unspoken biases that have invisibly corrupted political debates, such as those about affirmative action and the accommodation of the disabled. Cutting through misleading distinctions and false dichotomies, she gets to the heart of what equality means. -- Rebecca Brown, Allen Professor of Law, Vanderbilt University Deborah Hellman has produced one of the most thoughtful and engaging works on equality I know, beautifully written and meticulously argued. Anyone who thinks seriously about equality and discrimination must take account of her argument. -- Louis Michael Seidman, Professor of Constitutional Law, Georgetown University In a thoughtful analysis, Hellman argues that discrimination is a demeaning speech-act, and is wrongful on these grounds rather than in virtue of its motivation or effects. Her book is an important contribution to the literature on discrimination and expressive theories of law. -- Matthew D. Adler, Professor of Law, University of Pennsylvania Law School In When Is Discrimination Wrong? Deborah Hellman has taken on the important and difficult task of trying to establish logically consistent rules for determining just where in that fuzzy territory the line between legitimate and illegitimate discrimination should be drawn. Hellman's writing is clear and engaging, her examples relevant to the daily lives of many...Read Hellman's book as a very competent spur to thinking through for yourself the issues involved in appropriate and inappropriate discrimination. There'll probably be a fly in the ointment of the thesis you come up with too, but the process of thinking it all through can only be good for us all. -- Wendy Johnson * Times Higher Education Supplement * [Hellman] has provided a coherent, thoughtful approach that advances understanding of this intractable problem. -- P. J. Galie * Choice *

Deborah Hellman is the D. Lurton Massee Professor of Law at the University of Virginia School of Law.

* Introduction: The Discrimination Puzzle Part I: When is Discrimination Wrong? * The Basic Idea * Demeaning and Wrongful Discrimination * Interpretation and Disagreement Part II: Considering Alternatives Introduction to Part II * Merit, Entitlement and Desert * Accuracy and Irrationality * It's Not the Thought that Counts * Conclusion * Notes * Acknowledgments * Index