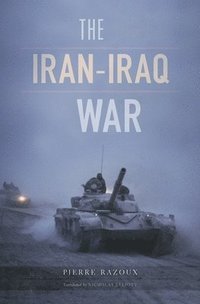 av Pierre Razoux
(2 röster)
Inbunden Engelska, 2015-11-03
457
Köp
Spara som favorit
Finns även som
Visa alla 1 format & utgåvor
From 1980 to 1988, Iran and Iraq fought the longest conventional war of the twentieth century. The tragedies included the slaughter of child soldiers, the use of chemical weapons, the striking of civilian shipping in the Gulf, and the destruction of cities. The Iran-Iraq War offers an unflinching look at a conflict seared into the region's collective memory but little understood in the West. Pierre Razoux shows why this war remains central to understanding Middle Eastern geopolitics, from the deep-rooted distrust between Sunni and Shia Muslims, to Iran's obsession with nuclear power, to the continuing struggles in Iraq. He provides invaluable keys to decipher Iran's behavior and internal struggle today. Razoux's account is based on unpublished military archives, oral histories, and interviews, as well as audio recordings seized by the U.S. Army detailing Saddam Hussein's debates with his generals. Tracing the war's shifting strategies and political dynamics-military operations, the jockeying of opposition forces within each regime, the impact on oil production so essential to both countries-Razoux also looks at the international picture. From the United States and Soviet Union to Israel, Europe, China, and the Arab powers, many nations meddled in this conflict, supporting one side or the other and sometimes switching allegiances. The Iran-Iraq War answers questions that have puzzled historians. Why did Saddam embark on this expensive, ultimately fruitless conflict? Why did the war last eight years when it could have ended in months? Who, if anyone, was the true winner when so much was lost?
Visa hela texten

[A] heavyweight work of history...[Razoux] brings a cool, factual approach to a large subject that has hitherto received too little attention...Razoux's deep research and analytical style make the book something of a general-staff history...It adds up to something extraordinary. -- Bartle Bull * Wall Street Journal * Once a decade, a book appears in which the creative genius and technical skill of the author perfectly match a vast subject. The French defense expert Pierre Razoux's book on the 1980-1988 Iran-Iraq war is superb and hugely topical... Razoux has a brilliant and economical way of making what became huge and complex battles intensely readable (the maps are excellent too)... This is a masterwork and anyone interested in where Iran goes next-for Iraq will surely cease to be a unitary state-should read the historian of real genius. -- Michael Burleigh * The Times * Pierre Razoux's The Iran-Iraq War is better by a mile than most of the military history that floods the English market. Very topical too since we will be getting to know Iran much more in future and its history should be required reading. -- Michael Burleigh * Evening Standard * What emerges in illuminating detail from Razoux's study is the impact of the power struggle between Ayatollah Khomeini's two proteges, the men he promoted and protected till the end of his life in June 1989, and left in charge of a house divided by their rivalry: Akbar Hashemi Rafsanjani and Ali Hosseini Khamenei. -- Joost Hiltermann * London Review of Books * Oddly this war isn't discussed much any more, even though it is arguably the breakthrough event for the ongoing collapse of parts of the Middle East...I found Pierre Razoux's The Iran-Iraq War to be a highly readable and useful account. -- Tyler Cowen * Marginal Revolution * This is an impressive, well-researched account of a conflict that helped define the modern Middle East, and it explains, as Razoux shows, much subsequent Iraqi and Iranian history... Razoux brilliantly links the conflict to the regional and Great Power politics of the period... Thus the Iran-Iraq war led directly into post-Cold War geopolitics and conflict. Razoux has produced the best book available on this important war. -- Jeremy Black * Military History * Although it was the longest war of the 20th century and caused over a million casualties, the Iran-Iraq War is largely forgotten by the Western world outside of a few military analysts and Middle East scholars...In spite of the ramifications of this war, a complete and readable single volume narrative has not been written in the West, until now. Razoux...has written a comprehensive and engrossing account of this war. Using a wealth of new or untapped sources, including the complete set of transcripts of the American debriefing of Saddam Hussein after his capture in 2004 and numerous interviews with Iranian and Iraqi commanders, Razoux provides unique insights into the strategic and operational thinking of both sides throughout the war...What makes this book so useful to both military historians and students of Middle Eastern politics is that Razoux is able to incorporate a complete look at the ripples caused by this conflict throughout the Middle East and within the Cold War as a whole...There is almost nothing occurring in the Middle East today that wasn't somehow influenced by this virtually unknown war. It has been long overdue for a comprehensive single-volume history, which this book ably fulfills. This is definitely a volume that both military historians and Middle Eastern scholars should have on their bookshelf. -- Jerry D. Lenaburg * New York Journal of Books * The Iran-Iraq War marked a turning point in the history of the Middle East. One cannot comprehend the situation in the Gulf today-the Iranian nuclear program or the political crises in Baghdad and Tehran-without understanding the frustrations and fears that sprang from that war. * Diplomatie * This is an important book, not least for the

Pierre Razoux is Research Director at IRSEM (Institute for Strategic Research) in Paris.