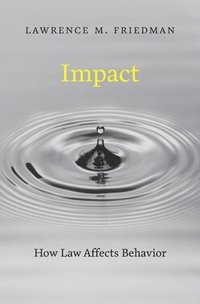 av Lawrence M Friedman
Inbunden Engelska, 2016-09-29
589
Köp
Spara som favorit
Laws and regulations are ubiquitous, touching on many aspects of individual and corporate behavior. But under what conditions are laws and rules actually effective? A huge amount of recent work in political science, sociology, economics, criminology, law, and psychology, among other disciplines, deals with this question. But these fields rarely inform one another, leaving the state of research disjointed and disorganized. Lawrence M. Friedman finds order in this cacophony. Impact gathers recent findings into one overarching analysis and lays the groundwork for a cohesive body of work in what Friedman labels "impact studies." The first important factor that has a bearing on impact is communication. A rule or law has no effect if it never reaches its intended audience. The public's fund of legal knowledge, the clarity of the law, and the presence of information brokers all influence the flow of information from lawmakers to citizens. After a law is communicated, subjects sometimes comply, sometimes resist, and sometimes adjust or evade. Three clusters of motives help shape which reaction will prevail: first, rewards and punishments; second, peer group influences; and third, issues of conscience, legitimacy, and morality. When all of these factors move in the same direction, law can have a powerful impact; when they conflict, the outcome is sometimes unpredictable.
Visa hela texten

Until now, surprisingly, there have been no synthetic analyses of a fundamental question: Why do some laws actually have a significant impact on the social and economic behaviors that they target, and why do other laws fall very short? By taking on this daunting task, and by brilliantly integrating rich veins of empirical research and social science theory, Lawrence Friedman has done a great favor for all scholars, students, and citizens-both the legal optimists and the legal skeptics-who wonder, as we all should, about law's potential to reshape society. -- Robert A. Kagan, University of California, Berkeley This is Friedman at his best. Impact is a masterful review, a grand synthesis, and a penetrating analysis of the power (and weakness) of law in defining and shaping the social order. It will be of great value to legal scholars and social scientists of all sorts, both in the United States and abroad. -- Malcolm M. Feeley, University of California, Berkeley