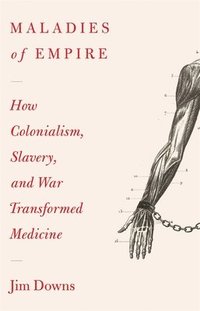 Köp
Spara som favorit
Kan levereras innan julafton!
Finns även som
Visa alla 1 format & utgåvor
A sweeping global history that looks beyond European urban centers to show how slavery, colonialism, and war propelled the development of modern medicine. Most stories of medical progress come with ready-made heroes. John Snow traced the origins of London's 1854 cholera outbreak to a water pump, leading to the birth of epidemiology. Florence Nightingale's contributions to the care of soldiers in the Crimean War revolutionized medical hygiene, transforming hospitals from crucibles of infection to sanctuaries of recuperation. Yet histories of individual innovators ignore many key sources of medical knowledge, especially when it comes to the science of infectious disease. Reexamining the foundations of modern medicine, Jim Downs shows that the study of infectious disease depended crucially on the unrecognized contributions of nonconsenting subjects-conscripted soldiers, enslaved people, and subjects of empire. Plantations, slave ships, and battlefields were the laboratories in which physicians came to understand the spread of disease. Military doctors learned about the importance of air quality by monitoring Africans confined to the bottom of slave ships. Statisticians charted cholera outbreaks by surveilling Muslims in British-dominated territories returning from their annual pilgrimage. The field hospitals of the Crimean War and the US Civil War were carefully observed experiments in disease transmission. The scientific knowledge derived from discarding and exploiting human life is now the basis of our ability to protect humanity from epidemics. Boldly argued and eye-opening, Maladies of Empire gives a full account of the true price of medical progress.
Visa hela texten

For those of us looking warily toward future epidemics, this book draws our attention to oft-forgotten sources of medical knowledge...Deserves to be read, particularly now. Few will question the salvational power that epidemiology will likely have in the years to come. -- Suman Seth * Science * Downs has now given global context to nineteenth-century advances in medicine and public health, beyond the dominant histories rooted in Western Europe and the ancient world. In Maladies of Empire, he centers slave ships, people living in colonized countries, prisoners, and wars in the narrative of medical discovery, at the foundation of epidemiology...He recovers lost and untold stories and makes visible things that need to be seen. -- Mary T. Bassett * Nature * [A] searching reappraisal of the origins of epidemiology...Those who lead epidemiology and public health today should read Maladies of Empire. They might wish to reflect on the origins of their discipline, the histories they choose to ignore, the myths they prefer to propagate. And they might wish to consider the debt they-we-owe to those who were, and in some cases still are, abused, mistreated, and manipulated in the name of public health. -- Richard Horton * The Lancet * Maladies of Empire has a captivating writing style, is exhaustively researched, and is persuasive in argumentation. Jim Downs has written a game-changing book. -- Deirdre Cooper Owens, author of <i>Medical Bondage: Race, Gender, and the Origins of American Gynecology</i> Maladies of Empire provides an illuminating, painstaking, yet engaging interrogation of original records and sources, filling critical gaps in the development of epidemiology. Indispensable and compelling. -- Harriet A. Washington, author of the National Book Critics Circle Award-winning <i>Medical Apartheid</i> Exposes how doctors with few clues made concerted efforts to track and understand deadly epidemics at a time when the colonialist enterprise was aggressively remaking the world...[Downs] fleshes out a crucial part of a larger tapestry to help explain the onset of racial segregation in the United States. The people whose experiences he tries to recover 'appear only as fragments' in the historical record but they impart a crucial dimension that remains utterly germane to the present. -- John Galbraith Simmons * Los Angeles Review of Books * Connects imperialism, enslavement, and warfare to argue that it is at the intersection of these processes that we can trace the beginnings of modern epidemiological thinking...Not only does such a narrative shed light on the violent foundations of disease control interventions and public health initiatives, but it also implores us to address their inequities in the present. At a time when low-income and middle-income countries struggle for access to vaccines in the COVID-19 pandemic, such an endeavor could not be more urgent. -- Raghav Kishore * The Lancet * Downs has written an eye-popping study of the history of infectious diseases, how they spread, and especially how they have been thwarted by experimentation on the bodies of soldiers, slaves, and colonial subjects. For three centuries medicine transformed science and human longevity by knowledge garnered from battlefields, slave ships, and mass migrations of vulnerable people. This is a timely, brilliant book about some of the brutal ironies in the story of medical progress. Our health today owes so much to the blood and suffering of nameless predecessors. -- David W. Blight, author of the Pulitzer Prize-winning <i>Frederick Douglass: Prophet of Freedom</i> In this brilliant and timely book, Jim Downs uncovers the origins of epidemiology in slavery, colonialism, and war. Controlling large populations through violence and burgeoning state bureaucracies allowed for new insights into the genesis and spread of human disease. A most original global history, this book is required reading for historians, medical rese

Jim Downs is Gilder Lehrman-National Endowment for the Humanities Professor of Civil War Era Studies and History at Gettysburg College. He is the editor of Civil War History and author and editor of six other books, including Sick from Freedom: African-American Illness and Suffering during the Civil War and Reconstruction.