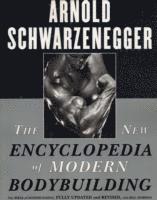 The New Encyclopedia of Modern Bodybuilding

The Bible of Bodybuilding, Fully Updated and Revised

av Arnold Schwarzenegger, Bill Dobbins
(10 röster)  |  Läs 3 recensioner
Häftad Engelska, 1999-11-01
447
Köp
Spara som favorit
From elite bodybuilding competitors to gymnasts, from golfers to fitness gurus, anyone who works out with weights must own this book - a book that only Arnold Schwarzenegger could write, a book that has earned its reputation as "the bible of bodybuilding." Inside, Arnold covers the very latest advances in both weight training and bodybuilding competition, with new sections on diet and nutrition, sports psychology, the treatment and prevention of injuries, and methods of training, each illustrated with detailed photos of some of bodybuilding's newest stars. Covering every level of expertise and experience, with his unique perspective as a seven-time winner of the Mr. Olympia title,The New Encyclopedia of Modern Bodybuilding will help you achieve your personal best.
Visa hela texten

Arnold Schwarzenegger served as governor of California from 2003 to 2011. Before that, he had a long career, starring in such films as the Terminator series; Stay Hungry; Twins; Predator; and Junior. His first book, Arnold: The Education of a Bodybuilder, was a bestseller when published in 1977 and, along with his Encyclopedia of Modern Bodybuilding, has never been out of print since.