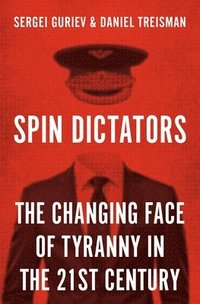 The Changing Face of Tyranny in the 21st Century

av Daniel Treisman, Sergei Guriev
Inbunden Engelska, 2022-04-05
269
Köp
Spara som favorit
Finns även som
Visa alla 2 format & utgåvor
How a new breed of dictators holds power by manipulating information and faking democracy Hitler, Stalin, and Mao ruled through violence, fear, and ideology. But in recent decades a new breed of media-savvy strongmen has been redesigning authoritarian rule for a more sophisticated, globally connected world. In place of overt, mass repression, rulers such as Vladimir Putin, Recep Tayyip Erdogan, and Viktor Orban control their citizens by distorting information and simulating democratic procedures. Like spin doctors in democracies, they spin the news to engineer support. Uncovering this new brand of authoritarianism, Sergei Guriev and Daniel Treisman explain the rise of such "spin dictators," describing how they emerge and operate, the new threats they pose, and how democracies should respond. Spin Dictators traces how leaders such as Singapore's Lee Kuan Yew and Peru's Alberto Fujimori pioneered less violent, more covert, and more effective methods of monopolizing power. They cultivated an image of competence, concealed censorship, and used democratic institutions to undermine democracy, all while increasing international engagement for financial and reputational benefits. The book reveals why most of today's authoritarians are spin dictators-and how they differ from the remaining "fear dictators" such as Kim Jong-un and Bashar al-Assad, as well as from masters of high-tech repression like Xi Jinping. Offering incisive portraits of today's authoritarian leaders, Spin Dictators explains some of the great political puzzles of our time-from how dictators can survive in an age of growing modernity to the disturbing convergence and mutual sympathy between dictators and populists like Donald Trump.
Visa hela texten

"A New Yorker Best Book of the Year" "A Financial Times Best Politics Book of the Year" "A Foreign Affairs Best Book of the Year" "Timely and indispensable." * Atlantic * "A fascinating new book." * The Economist * "[A] well-researched and entertaining book."---Tony Barber, Financial Times "Entertaining and disquieting."---Gideon Rachman, Financial Times "With meaty graphs and well-organized evidence . . . Guriev and Treisman advance subtler arguments, as they show that authoritarian rulers can come to power by democratic means and stay there."---Adam Gopnik, New Yorker "If we failed to end tyrants, we played our part in helping to mould them. As Sergei Guriev and Daniel Treisman observe in their intelligent, important book Spin Dictators, throughout this time something far more interesting and dangerous was happening. The most sophisticated dictators were reforming themselves, and the lesson they internalised was not the need to be democratic - that, after all, went against who they were - but the need to look democratic."---David Patrikarakos, Spectator "As Sergei Guriev and Daniel Treisman persuasively argue in Spin Dictators, their absorbing, meticulous study of the evolution of authoritarianism in the late 20th and early 21st centuries, craft and deception have in recent decades supplanted fear and terror as the defining characteristics of today's autocratic rulers. . . . In diagnosing a critical problem and proposing a prophylactic, Guriev and Treisman have performed a great service to the field of geopolitics."---Michael M. Rosen, Washington Examiner "Sergei Guriev and Daniel Treisman have written the most astute account of the system that has risen to challenge liberal democracy in the 21st century. Their book, Spin Dictators: The Changing Face of Tyranny in the 21st Century, describes the methods which have made it possible for Putin, Viktor Orban, Recep Tayyip Erdogan and others to rule over societies that in most cases had developed reasonably well functioning democracies. Other scholars and journalists have written about the tactics used by 21st century autocrats to secure control over the institutions of a free society. But Guriev and Treisman have assembled the most thorough analysis of the building blocks of contemporary dictatorships."---Arch Puddington, American Purpose "A deeply researched tour d'horizon of the evolving dark arts of authoritarian politics."---G. John Ikenberry, Foreign Affairs "The authors carefully document dozens of strategies used by authoritarian regimes around the world to successfully pass themselves off as populist supporters of democracy when the actual goal is tyranny and absolute power. As depressing as this scenario may be, the authors do politically concerned readers an immense favor, enabling us to recognize these tactics and, with that knowledge, ultimately oppose this new breed of dictator." * Booklist * "Thoroughly enjoyable and enlightening."---Joshua Huminski, Diplomatic Courier "The dictatorships of the 20th century rested on violence and direct coercion. This book argues that the 21st century has seen the emergence of a new kind of spin dictatorship - in places as diverse as Hungary, Singapore and Turkey - that adopts the forms of democracy while subverting the substance."---Gideon Rachman, Financial Times

Sergei Guriev is professor of economics and provost at Sciences Po in Paris and former chief economist at the European Bank for Reconstruction and Development. Twitter @sguriev Daniel Treisman is professor of political science at the University of California, Los Angeles, and the author of The Return: Russia's Journey from Gorbachev to Medvedev. Twitter @dstreisman