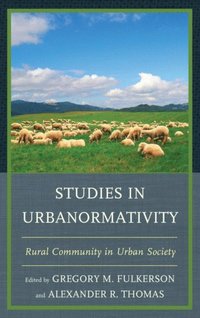 av Gregory M Fulkerson, Alexander R Thomas, Elizabeth Seale, Alexander R Thomas, Karen E Hayden
E-bok (EPUB - DRM), Engelska, 2013-12-19
1522
Ladda ned
Spara som favorit
Laddas ned direkt
Läs i vår app för iPhone och iPad
Finns även som
Visa alla 1 format & utgåvor
The world has been witnessing a long unfolding process of urbanization that not only has altered the structural basis of society in terms of political economy, but has also symbolically relegated rural people and life to a secondary or deviant status through an ideology of urbanormativity. Both structural and cultural changes rooted in urbanization are connected in complex ways to spatial arrangements that can be described in terms of inequality and uneven development. Through a focus on localities, Studies in Urbanormativity: Rural Community in Urban Society examines the implications of urbanization and its corresponding ideology. Urbanormativity justifies rural domination by holding urban life as the standard against which rural forms are compared and deemed to be irregular, inferior, or deviant. Urban production, as conceptualized in this book, is inherently exploitative of rural resources?natural, social, cultural, and symbolic. As this exploitation advances, a wake of entropic conditions is left behind in the forms of degraded landscapes, broken social institutions, and denigrated communities, cultures and identities. Edited by Gregory M. Fulkerson and Alexander R. Thomas, Studies in Urbanormativity engages a topic on which scholars have been surprisingly silent. Designed for advancing theory and practice, the chapters provide new theoretical tools for understanding the complex relationship between the urban and rural. While primarily intended for scholars and practitioners interested in rural life, rural policy, and community development, the insights of this book will also be of interest to scholars studying various forms of cultural and social domination, as well as identity politics.
Visa hela texten