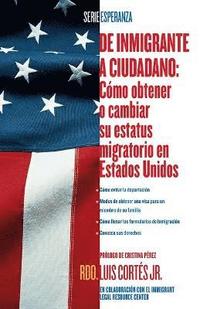 De inmigrante a ciudadano (A Simple Guide to US Immigration)

The Reverend Luis Cortes Jr. is the president and CEO of Esperanza USA, the largest Hispanic faith-based community-development corporation in the country. In January 2005, he was featured as one of Time magazine's "25 Most Influential Evangelicals." Cristina Perez is a successful lawyer, three-time Emmy Award winning television personality, radio host, entrepreneur/business owner, national author and columnist, and devoted mother and wife. The daughter of Colombian immigrants, Cristina was born in New York. Cristina was the host of the Spanish language television program La Corte de Familia (Family Court) which aired nationally and internationally in fifteen countries on the Telemundo Network/NBC (2000-2005). In 2006, Cristina made her English-language television debut on Twentieth Television's first-run syndicated Cristina's Court. She has been named Woman of the Year in California for her community activities and was named one of America's Top 10 Latina Advocates. Visit her online at CristinaPerez.tv.