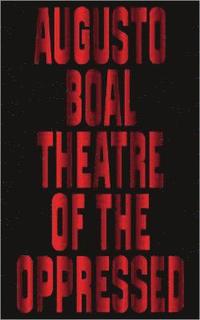 Theatre of the Oppressed

av Augusto Boal
Häftad Engelska, 2019-03-20
189
Köp
Spara som favorit
Finns även som
Visa alla 4 format & utgåvor
Augusto Boal saw theatre as a mirror to the world, one that we can reach into to change our reality. This book, The Theatre of the Oppressed, is the foundation to 'Forum Theatre', a popular radical form practised across the world. Boal's techniques allowed the people to reclaim theatre, providing forums through which they could imagine and enact social and political change. Rejecting the Aristotelian ethic, which he believed allowed the State to remain unchallenged, he broke down the wall between actors and audience, the two sides coming together, the audience becoming the 'spect-actors'. Written in 1973, while in exile from the Brazilian government after the military coup-d'etat, this is a work of subversion and liberation, which shows that only the oppressed are able to free themselves.
Visa hela texten

'An affable intellectual and an effervescent teacher, [Boal] was a theatrical Johnny Appleseed who spent his later years spreading his doctrines of the theater as a land of equal opportunity for professionals and nonprofessionals alike' -- The New York Times 'Oppression, according to Augusto Boal, is when one person is dominated by the monologue of another and has no chance to reply. Boal's life is devoted to giving those who are in this one-down position the tools with which to express themselves and discover a way out of their powerlessness' -- The Harvard Gazette '[His] achievement is so remarkable, so original and so ground-breaking that I have no hesitation in describing the book as the most important theoretical work on the theatre in modern times' -- George Wellwarth, author of Modern Drama and the Death of God 'Should be read by everyone in the world of theatre who has any pretensions at all to political commitment' -- John Arden, playwright 'Boal's terrific energy came from his faith in the creativity, spontaneity and ability of all people, however underprivileged, to change their situation' -- The Guardian

Augusto Boal (1931-2009) was a Brazilian theatre practitioner, drama theorist and political activist. He is the author of Theatre of the Oppressed (Pluto Press, 2019).