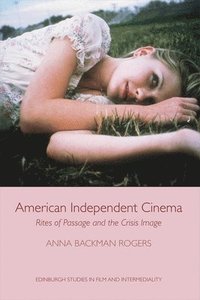 Rites of Passage and the Crisis Image

av Anna Backman Rogers
Inbunden Engelska, 2015-06-30
299
Köp
Spara som favorit
Finns även som
Visa alla 1 format & utgåvor
This book examines crisis, transition and metamorphosis in American independent cinema. By examining six films, all of which conform to the notion of 'indiewood' (King 2005) from a formal perspective, this book argues that American 'indie' cinema is not one merely in crisis, but also of crisis. As a cinema that draws upon an American cinematic heritage that explores various rites of passage (the teen movie, the road movie, the western), these films deal in images of crisis, transition and metamorphosis. This cinema of crisis offers surprisingly subversive and critical images that both engage with and undermine modes of cliched representation and thought by exploring notions of ambiguity and opacity. Case studies include: The Virgin Suicides, Elephant, Dead Man, Last Days, Somewhere and Broken Flowers; engages with and develops on recent scholarship on American independent film from a formal perspective and situates analysis of indie film within the context of American generic cinematic (and historical) traditions.
Visa hela texten

"American Independent Cinema offers a welcome original take on US indie films. The first book-length study to engage with this most popular of forms using Deleuze, it provides a refreshing political engagement with the aesthetics of US indies. Backman Rogers' deft argument insightfully illuminates how US indie's manifold bodies in crisis (for example, consider Bill Murray's ubiquitous deadpan lethargic characters) produce a "radical or cerebral critique" of neoliberal USA. A sophisticated scholarly endeavour, the engaging prose enables Deleuze's complex ideas to be realised in the most lucid way, and in relation to some of the most important films of recent decades: from Dead Man through Elephant and Broken Flowers to Somewhere." -- Professor David Martin-Jones, University of Glasgow "[American independent cinema: rites of passage and the crisis image] presents case studies of films that offer aesthetic forms of 'radical or cerebral critique' (2). These films not only rethink what American independent cinema can do, but also rethink how we can think through cinema." -- Laura Stamm, University of Pittsburgh, New Review of Film and Television Studies