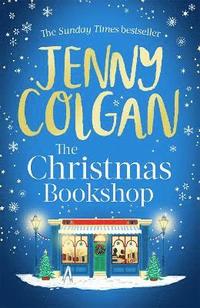 av Jenny Colgan
Häftad Engelska, 2022-10-27
116
Köp
Spara som favorit
Finns även som
Visa alla 1 format & utgåvor
'Nobody does cosy, get-away-from-it-all romance like Jenny Colgan' Sunday Express Escape to a cosy festive bookshop this winter with this page-turning and magical treat. PRAISE FOR JENNY COLGAN An evocative, sweet treat' Jojo Moyes 'Gorgeous, glorious, uplifting' Marian Keyes 'A cracker - the must-read this festive season' Sun 'Irresistible' Jill Mansell 'Just lovely' Katie Fforde 'Naturally funny, warm-hearted' Lisa Jewell 'A gobble-it-all-up-in-one-sitting kind of book' Mike Gayle _______________ The brand new feel-good Christmas novel from Sunday Times top ten bestselling author, Jenny Colgan. Carmen has always worked in her local department store. So, when the gorgeous old building closes its doors for good, she is more than a little lost. When her sister, Sofia, mentions an opportunity in Edinburgh - a cute little bookshop, the spare room in her house - Carmen is reluctant, she was never very good at accepting help. But, short on options, she soon finds herself pulling into the snowy city just a month before Christmas. What Sofia didn't say is that the shop is on its last legs and that if Carmen can't help turn things around before Christmas, the owner will be forced to sell. Privately, Sofia is sure it will take more than a miracle to save the store, but maybe this Christmas, Carmen might surprise them all... ____________________ Why readers ADORE Jenny Colgan 'Jenny Colgan has a way of writing that makes me melt inside' 'Her books are so good I want to start over as soon as I have finished' 'There's something so engaging about her characters and plots' 'Her books are like a big, warm blanket' 'Her stories are just so fabulous' 'She brings her settings and characters so vividly to life' 'The woman is just magic'
Visa hela texten

Don't miss the brand-new festive tale from the Queen of Christmas... a charming hardback that will warm your heart this winter. * Yours * You can't help but feel your heart lift as you read this gorgeous story. * Good Housekeeping * Sharp comedy and keen social observations ... a touching love letter to Edinburgh. * Reader's Digest * A simply wonderful read - descriptive and full of humour, fun and pathos. * Bishops Stortford Indi * A Christmas gift for a weary nation * Scottish Sunday Times * You're in for a real Christmas cracker ... will keep me going until February! * Metro * My Weekly's top pick of the month A cosy winter warmer of a tale * Guardian *

Jenny Colgan is the author of numerous Sunday Times bestselling novels and has won various awards for her writing, including the Melissa Nathan Award for Comedy Romance, the RNA Romantic Novel of the Year Award and the RNA Romantic Comedy Novel of the Year Award. Her books have sold more than five million copies worldwide and in 2015 she was inducted into the Love Stories Hall of Fame. Jenny is married with three children and lives in Scotland. For more about Jenny, visit her website and her Facebook page, or follow her on Twitter and Instagram. Twitter: @jennycolgan Facebook: jennycolganbooks Instagram: jennycolganbooks